WASHINGTON (CNN) -- The White House released the text Monday of a controversial back-to-school speech to students from President Obama. 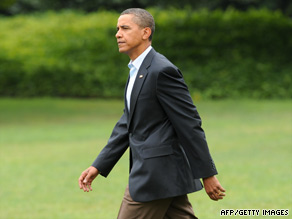 The uproar over President Obama's back-to-school speech led the White House to release the transcript Monday.

Many conservatives have expressed a fear that the address would be used to push a partisan political agenda. In the text of the speech, however, Obama avoids any mention of controversial political initiatives. He repeatedly urges students to work hard and stay in school.

"No matter what you want to do with your life, I guarantee that you'll need an education to do it," he says.

"This isn't just important for your own life and your own future. What you make of your education will decide nothing less than the future of this country."

The text of the 18-minute speech was posted on the White House Web site so people can read it before its scheduled Internet broadcast to schoolchildren Tuesday. Read text of Obama's speech to students (pdf)

Some of the president's critics have been adamantly opposed to the idea of an address by Obama to children.

"The president's speeches tend to be [about] what's wrong with the country and what can we do to fix it," said Bill Hogsett, a parent from Dallas, Texas.

"I believe this is the greatest country on Earth, and I try to teach that to my children. ... I don't want them hearing that there's a fundamental flaw with the country and the kids need to go forward to fix it."

Hogsett, who spoke Monday shortly before Obama's remarks were released, said he wanted to read the speech before making a final judgment.

Amy Veasley, another parent from the Dallas area, said she was surprised by the controversy.

A Baltimore, Maryland, teacher who asked not to be identified bemoaned the fact that the country has "become so polarized that we believe that our president is an enemy and not our leader."

During Bush's presidency, she said, "whether I disagreed or not, I still saw him as a leader."

On Sunday, Secretary of Education Arne Duncan said that parents who are threatening to keep their children home Tuesday to avoid Obama's speech were being "silly."

Appearing on the CBS program "Face the Nation," Duncan emphasized that it is up to school officials whether to include the speech in the day's activities and that the message of the speech is simply to encourage children to finish school.

"That's just silly," he said of anyone planning to have their kids stay home because of the speech. "They can go to school. They can not watch."

The speech is about "the president challenging young people," Duncan asserted.

Some school administrators have decided to show the president's speech, but others will not.

Minnesota Gov. Tim Pawlenty, a possible contender for the GOP's 2012 presidential nomination, said Sunday that Obama's speech would disrupt an already-hectic first day of school for many students.

"I think there's concerns about the disruption," he said on CNN's "State of the Union," calling the scheduling of the speech a "little ham-fisted" by the White House.

"There [are] also concerns about is this going to be done in an appropriate manner. I trust and hope that the White House will have a content that is not political and they're not using the public school infrastructure for that purpose."

Duncan, however, noted Obama's speech is not unprecedented. President George H.W. Bush delivered a nationally televised speech to students from a Washington school in fall 1991, encouraging them to say no to drugs and work hard. Read text of Bush's speech to students (pdf)

In November 1988, President Reagan delivered more politically charged remarks that were made available to students nationwide. Among other things, Reagan called taxes "such a penalty on people that there's no incentive for them to prosper ... because they have to give so much to the government." Read text of Reagan's speech to students (pdf)

Some of the controversy over Obama's speech involved a proposed lesson plan created by the Education Department to accompany the address. An initial version of the plan recommended that students draft letters to themselves discussing "what they can do to help the president."

After pressure from conservatives, the White House distributed a revised version encouraging students to write letters about how they can "achieve their short-term and long-term education goals."

Duncan said Sunday that the passage was poorly worded.

Former House Speaker Newt Gingrich told "Fox News Sunday" that Obama's speech is a good idea if the message is a positive one about completing school.

"It is good to have the president of the United States say to young people across America, 'Stay in school, study, and do your homework,' " Gingrich said.

"Now that the White House got their hand in the cookie jar caught, they changed everything," he said Monday.

After reading the text, he said, "My kids will be watching the president's speech, as I hope all kids will."

CNN's Lauren Kornreich and Rebecca Sinderbrand contributed to this story.