(CNN) -- U.S. Rep. Charles Boustany of Louisiana, a doctor, gave the response for the Republican Party to President Obama's address to a joint session of Congress on Wednesday. Here is a transcript of his speech. 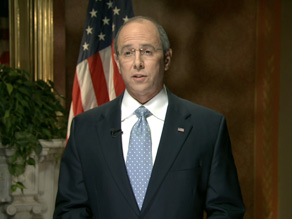 Good evening. I'm Dr. Charles Boustany, and I'm proud to serve the people of Louisiana's 7th Congressional District. I'm also a heart surgeon, with more than 20 years of experience during which I saw firsthand the need for lowering health cost.

Republicans are pleased that President Obama came to the Capitol tonight. We agree much needs to be done to lower the cost of health care for all Americans.

On that goal, Republicans are ready, and we've been ready to work with the president for common-sense reforms that our nation can afford.

"Afford" is an important word. Our country's facing many challenges. The cost of health care is rising. Federal spending is soaring. We're piling huge debt on our children. And families and small businesses are struggling through a jobless recovery with more than 2.4 million private sector jobs lost since February.

But they want their elected leaders to get it right.

Most Americans wanted to hear the president tell [House Speaker Nancy] Pelosi, Majority Leader [Harry] Reid and the rest of the Congress that it's time to start over on a common-sense, bipartisan plan focused on lowering the cost of health care while improving quality.

That's what I've heard over the past several months, in talking to thousands of my constituents.

Replacing your family's current health care with government-run health care is not the answer. In fact, it will make health care much more expensive.

That's not just my personal diagnosis as a doctor or a Republican. It's the conclusion of the nonpartisan Congressional Budget Office, the neutral scorekeeper that determines the cost of major bills.

I read the bill Democrats passed through committee in July. It creates 53 new government bureaucracies, adds hundreds of billions to our national debt and raises taxes on job creators by $600 billion.

And it cuts Medicare by $500 billion, while doing virtually nothing to make the program better for our seniors.

The president had a chance, tonight, to take the government-run health care off the table. Unfortunately, he didn't do it.

We can do better with a targeted approach that tackles the biggest problems. Here are four areas -- four important areas where we can agree, right now.

One, all individuals should have access to coverage regardless of pre-existing conditions.

Two, individuals, small businesses and other groups should be able to join together to get health insurance at lower prices, the same way large businesses and labor unions do.

Three, we can provide assistance to those who still cannot access a doctor.

And four, insurers should be able to offer incentives for wellness care and prevention.

That's something particularly important to me. I operated on too many people who could have avoided surgery if they'd made simply -- simply made healthier choices earlier in life.

We do have ideas the president has agreed with. We're grateful the president mentioned medical liability reform and we hope he's serious. We need to establish tough liability reform standards, encourage speedy resolution of claims, and deter junk lawsuits that drive up the cost of care. Real reform must do this.

Let's also talk about letting families and businesses buy insurance across state lines. I and many other Republicans believe that that will provide real choice and competition to lower the cost of health insurance. Unfortunately, the president disagrees.

You can read more about all of these reforms at healthcare.gop.gov. These are common sense reforms that we can achieve right now without destroying jobs, exploding the deficit, rationing care, or taking away the freedoms American families cherish.

This Congress can pass meaningful reform soon to reduce some of the fear and anxiety families are feeling in these very difficult times. Working together in a bipartisan way, we can truly lower the cost of health care, while improving quality for the American people.