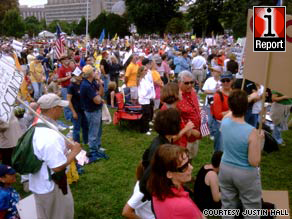 iReporter Justin Hall attended Saturday's rally. "We think things can get a lot worse before they get better," he said.

Marchers en route to the rally held no feelings in check as they waved signs reading, "Proud member of the angry mob," "I didn't vote for this Obamanation," "Fire the czars" and "You represent us, not rule us."

Nazi imagery and a poster of President Obama as an African witch doctor were popular images.

The march leading to the Capitol stretched for blocks on the final day of the Tea Party Express' cross-country bus tour, which began August 28 in Sacramento, California. En route, the group hosted rallies in about 30 cities. An official crowd estimate was not available, but reporters at the scene described the massive crowd as reaching the tens of thousands.

At each stop, the tour highlighted members of Congress "who have voted for higher spending, higher taxes, and government intervention in the lives of American families and businesses," according to The Tea Party Express Web site.

One woman at Saturday's events summed up her feelings about issues this way: "It's too much too fast."

A major theme of the rally was the push for less government.

Watch protesters converge on the Capitol »

"The government should be concentrating on cutting spending on all the programs, not thinking of new, wonderful ways of spending more .... I've voted my whole life. This is the first time in my life I've gotten off the couch and said, 'I'm sick of this. It's only three hours away, and I'm going to be there.'"

Yet another man said, "We're here to let the government know that we do not want government involvement in our health care nor do we want the higher taxation that comes along with such a proposal." iReport.com: iReporters trade barbs

Several speakers were to speak throughout the afternoon, with events wrapping up about 4 p.m. ET.

The tea party movement gained momentum this year; several parties were held across the country this summer to protest Obama and the Democrats' economic stimulus plans, among other things.

On July 4, nearly 2,000 advocates, toting signs and chanting slogans, rallied outside Congress. Activists said the TEA Party Day -- an acronym for "Taxed Enough Already" -- was in response to runaway government spending. But now, the focus is on health care reform, an issue that has prompted a more encompassing debate.

"What brought everything together was the Obamacare idea, which contains every odiferous objection," Tea Party Express organizer Mark Williams said in August.

Although Tea Party Express tour was funded by Our Country Deserves Better, a conservative political action committee, Williams said his organization is nonpartisan, and that the rallies are not aimed at one politician over another, namely Obama. iReport.com: Images from the rally

"This is not people upset over one particular politician or one particular party," Williams has said. "In fact, if you ask the Republicans in the crowd, you'll find they are just upset at their party as they are at the Democrats."

Members from conservative groups such as Freedom Works, run by former House Majority Leader Dick Armey, Campaign Liberty and the Institute for Liberty also were expected to participate in Saturday's rally.

All About Protests and Demonstrations • Health Care Policy • U.S. Capitol