Prisoners held by U.S. in Afghanistan to get help with cases

WASHINGTON (CNN) -- The Obama administration is in the process of establishing new procedures that could allow prisoners to challenge their detentions at a U.S. facility in Afghanistan, according to Pentagon spokesman Bryan Whitman. 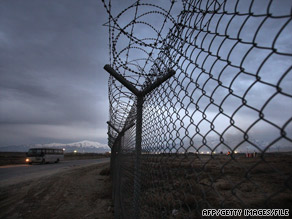 A bus passes a fence topped with razor wire at Bagram Air Base, Afghanistan, earlier this year.

For the first time at the Bagram Air Base detention facility, detainees will be given representatives who will help them prepare their cases.

Under the new policy, which was decided in July, a first review of a detainee's status will come within 60 days of detention, Whitman explained. They will have a military person appointed as a "personal representative" who can shepherd them through the process and help gather witness statements, although it's not at all clear how that would happen.

Those already in detention will be given a personal representative to assist them in front of a review board for their appearances every six months.

Whitman would not say whether any reviews have begun yet.

There are about 600 detainees at Bagram, Whitman said, but added that the United States will not release a specific number. Since July, the detainees have been on a hunger strike protesting their detention and lack of access to counsel, according to the group Humans Rights First.

Whitman said a similar process "was done with a degree of success" in Iraq, in terms of managing the numbers of detainees and in reducing those numbers.

U.S. handling of detainees at Bagram has come under sharp criticism from human rights groups and many Afghans.

"Once you get in there, there is no way of getting out," said Sahr MuhammedAlly, a lawyer for Human Rights First. "Bagram is a no man's land."

MuhammedAlly said that while the new procedures are "an improvement," she would still like the detainees to have lawyers to represent them, not military officials. The 60 days for a first review is half a month sooner than the current system, she said.

"People didn't know why they were captured other than some huge allegation," said MuhammedAlly, who has spoken to a number of Bagram prisoners after they were released. She said there are a lot of cases of mistaken identities and prisoners turned in because of tribal rivalries, but up to now it took a long time to win release for the innocent. She added that the new procedures do not address the reliability of information used to initially detain prisoners.

Bagram is "second to civilian casualties when it comes to discontent" for Afghans, she said.

In a case brought against the United States challenging some long-term prisoners' status as enemy combatants, a federal judge criticized the procedure for detaining prisoners at Bagram as worse than at Guantanamo Bay, Cuba.

"These petitioners have been determined to be 'enemy combatants,' a status they contest. Moreover, the process used to make that determination is inadequate and, indeed, significantly less than the Guantanamo detainees," wrote Judge John Bates in a decision granting the alleged terrorists the right to challenge their detention in federal court.