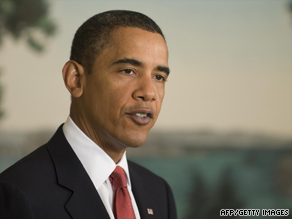 "Critics will also insist that the Poles and Czechs are right: He axed the Bush program in a foolish and doomed bid to 'reset' relations with Russia," he said. "Here, Moscow isn't likely to be of much help to the White House. The Kremlin will claim a diplomatic victory and it won't offer any concessions in return."

The Council on Foreign Relations released a report Thursday that said repeated technological failures had put the Bush missile plan behind schedule and likely over budget as well.

"This new approach provides a better missile defense capability for our forces in Europe, for our European allies and eventually for our homeland than the program I recommended almost three years ago," he said.

Gates served as secretary of defense in the last two years of the Bush administration, and stayed on in the post when Obama took office.

The Bush-era proposal called for the United States to set up a radar site in the Czech Republic and 10 missile interceptors in Poland to counter the threat of Iran launching long-range missiles at America's allies in Europe.

The new system will have "hundreds" of missile interceptors instead, the Pentagon's point man on it said.

He contrasted the new sensor technology with the radar systems envisioned in the old plan, which he called "basically left over from the Cold War."

The new plans include three types of missiles to shoot down incoming threats -- Patriot missiles, which defend a single location; SM-3 interceptors, which he said could protect "a general area like the area from Philadelphia to Washington, D.C.;" and large ground-based interceptors in Alaska and California.

"Now that the plan is official, we are working with MDA (Missile Defense Agency) to review all costs," he said.

The European strategy, the MDA said, was budgeted at $4.5 billion.

Cartwright did not say how much the new plan would cost compared with the old one, but pointed out that Patriot and SM-3 missiles were significantly cheaper than the interceptors the Bush proposal relied on.

"You do not want to go after large numbers (of missiles) with the very expensive missiles unless it's absolutely essential," he said.

He said the fact that the United States sells Patriot and Aegis systems to other countries reduces the cost to Washington. The SM-3 missiles are part of the Aegis Ballistic Missile Defense system.

The "decision calls into question the security and diplomatic commitments the United States has made to Poland and the Czech Republic," said U.S. Senator John McCain of Arizona, the 2008 Republican nominee for president.

"We appreciate the responsible approach of the U.S. president," he said, characterizing the new U.S. position as "putting into practice" an agreement he made with Obama earlier this year.

"I discussed this issue with the U.S. president during our meetings in London and Moscow. At that time, in our joint statement, we agreed to, and set in stone that Russia and the United States will seek to work together to assess the risks of missile proliferation in the world," Medvedev said.

Russia's ambassador to the United Nations grinned when asked if he had heard Obama's announcement.

Missile defense has been a sore point in relations between Washington and Moscow, with Russia believing the shield would ultimately erode its own strategic nuclear deterrent.

Obama has maintained that Russia had nothing to fear from a U.S. missile defense system, which would be designed to intercept a solitary missile from Iran or North Korea, as opposed to "a mighty Russian arsenal."

"This has nothing to do with Russia," the official said before Obama made his announcement Thursday morning. "The notion that we're abandoning missile defense is completely false. It's evolving into a different system."

A U.S. delegation held high-level meetings Thursday in both Poland and the Czech Republic to discuss the missile defense system.

American officials, including Obama, insisted Thursday's announcement did not reflect any lesser commitment to European defense.