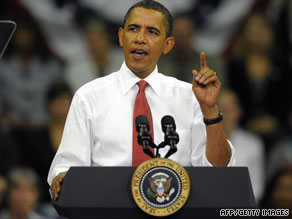 The meetings come as hopes for renewed Israeli-Palestinian talks have dimmed despite diplomatic efforts of former Maine Sen. George Mitchell, the U.S. envoy for the Middle East, who capped off last week's visit to the region with a second round of talks with both sides.

The meetings, set for the sidelines of next week's U.N. General Assembly session in New York, are "another sign of the president's deep commitment to comprehensive peace that he wants to personally engage at this juncture," Mitchell said in the White House statement.

Obama will talk with each leader separately before all three meet together, the White House said.

Mitchell failed to get a trilateral meeting on the sidelines of next week's U.N. General Assembly session in New York, according to an Israeli government official Friday, who declined to be named because of the sensitive nature of the talks.

Mitchell had been working to broker a last-minute deal before the start of the Jewish New Year, which began at sundown Friday, and the Muslim Eid al-Fitr holiday this weekend. One of the sticking points has been the issue of an Israeli settlement freeze.

The United States and Israel have publicly disagreed on Israeli plans to build more housing on land the Palestinians regard as theirs, and Obama administration demands for a complete freeze have been ignored by the Netanyahu government.

Israel recently approved the construction of 455 new units -- in addition to the about 2,500 already in various stages of construction -- in the West Bank, over the objections of Washington.

Abbas has so far rejected resuming talks with Israel until the Jewish state halts all settlement building in the occupied West Bank and in predominantly Palestinian East Jerusalem.

After Mitchell's meeting with Abbas on Friday, the chief Palestinian negotiator, Saeb Erakat, told reporters that the settlement issue had not been resolved.

In an interview Thursday with Israeli Channel 2, Netanyahu downplayed the importance of Obama's calls for a settlement freeze.

"There are 2,400 units that are currently being built, and another 500 that we approved. Do you want to call that a freeze? I don't call it a freeze, I call it a slowdown in building -- I am willing to do that to help the process and in parallel to preserve normal life of the residents [of the settlements]."

Earlier in the week, Netanyahu said in a closed-door Knesset committee meeting that Israel would agree only to a partial reduction of housing construction and for a limited time, not the year the United States would like, said a government official who did not want to be identified because he was not authorized to speak about the meeting.

Netanyahu said no agreement had been reached on the length of time for the building hiatus, the source told CNN.

Netanyahu has said in the past that a moratorium would not apply to East Jerusalem, which Israel claims as part of its sovereign capital since taking the territory away from Jordan during the Six Day War in 1967. Palestinians want East Jerusalem to be the capital of a future Palestinian state.