NEW YORK (CNN) -- Russian President Dmitry Medvedev met Wednesday with U.S. President Barack Obama, then signaled he could support sanctions against Iran over its efforts to develop a nuclear weapon. 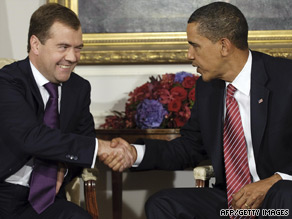 "Russia's position is clear: Sanctions rarely lead to productive results, but in some cases sanctions are inevitable," Medvedev said in a joint appearance with Obama after their talks.

Iran claims its nuclear program is intended for peaceful purposes, but the international community accuses the nation of continuing to try to develop nuclear weapons capability.

The United States and Russia previously have disagreed over Iran, and over possible steps the U.N. Security Council may take -- including imposing sanctions -- to push Tehran to comply with U.N. demands concerning its nuclear program.

Medvedev said Wednesday that he and Obama discussed negotiations with Iran, including possible incentives, to help it "make the right decision."

He then opened the door to sanctions, indicating a more unified approach to the issue.

Obama praised Medvedev for what he called an "excellent working relationship" the two have developed.

Iran has been "violating too many of its international commitments," Obama said. He committed himself to negotiating with Iran on the issue, but said "serious sanctions" were a possibility if Iran failed to respond seriously.

Last week, Obama announced that the United States was dropping plans to base a missile defense shield system in Poland and the Czech Republic, a proposal that had rankled Moscow.

Speaking on Sunday's "Face The Nation" on CBS, Obama said his objective in revamping the U.S. defense shield plan "was not to negotiate with the Russians."

"The Russians don't make determinations about what our defense posture is," Obama told CBS.

"If the byproduct of it is that the Russians feel a little less paranoid and are now willing to work more effectively with us to deal with threats like ballistic missiles from Iran or the nuclear development in Iran, you know, then that's a bonus."

Meanwhile, Secretary of State Hillary Clinton met with ministers of the five permanent members of the U.N. Security Council -- the United States, the United Kingdom, France, China and Russia -- plus Germany to prepare for the upcoming talks with Iran.

Iran, Clinton told reporters after the meeting, should come to the October 1 talks "ready to engage" on its nuclear program. She said the international community continues to have "serious concerns" that Iran's nuclear program could be used for military purposes.

Clinton wouldn't talk about sanctions but said "clearly there are consequences" if Iran does not address international concerns. The next step, she said, would be determined by the outcome of the meeting.

"This process is now firmly up to Iran," she said.

British foreign Secretary David Miliband read a statement on behalf of the group, urging Iran to cooperate further with the International Atomic Energy Agency to address concerns about the "possibility of military dimensions to Iran's nuclear program."

"We have consistently stated that we want to negotiate a comprehensive long-term agreement to resolve the Iranian nuclear issue," he said. "But this can only be achieved if both sides are willing to approach these matters in a spirit of mutual respect and are committed to looking for solutions going forward."