Bill Clinton: 'Vast right-wing conspiracy' as 'virulent' as ever

WASHINGTON (CNN) -- The "vast right-wing conspiracy" that attacked him during his presidency has been weakened, but continues to operate against President Obama, former President Clinton said Sunday. 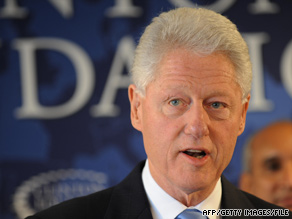 Former President Clinton said Republicans won't see a 1994-like surge at the polls in 2010.

On NBC's "Meet the Press," Clinton was asked about the term his wife Hillary Clinton, now secretary of state, famously coined. "Is it still there?" host David Gregory asked.

"Oh, you bet. Sure it is. It's not as strong as it was, because America's changed demographically, but it's as virulent as it was," the former president replied.

"I mean, they're saying things about him [Obama] -- you know, it's like when they accused me of murder and all that stuff they did," Clinton said, in an apparent reference to conspiracy theories surrounding the suicide of White House deputy counsel Vince Foster.

"It's not really good for the Republicans and the country, what's going on now," Clinton said. "I mean, they may be hurting President Obama. They can take his numbers down, they can run his opposition up. But fundamentally, he and his team have a positive agenda for America."

Clinton was asked whether he is concerned that the 2010 midterm elections could resemble those of 1994, when Republicans took control of the House and Senate two years into his first term.

"There's no way" that could happen, Clinton said, adding that "the country is more diverse and more interested in positive action." Also, he said, Republicans had control of Congress for several years under President George W. Bush, "and they know the results were bad."

And, he said, "the Democrats haven't taken on the gun lobby like I did."

"Whatever happens, it'll be manageable for our president," Clinton said.

All About Bill Clinton • Barack Obama