WASHINGTON (CNN) -- President Obama will travel this week to Copenhagen, Denmark, to make a big push for holding the 2016 Summer Olympic Games in Chicago, Illinois, the White House said Monday. 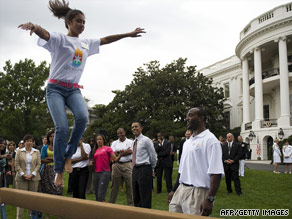 Obama will join other administration officials and first lady Michelle Obama in pitching Chicago to the International Olympic Committee on Friday, spokesman Robert Gibbs said. The IOC will vote on the host city the same day.

No other U.S. president has ever attended an IOC vote.

Obama, who lived in Chicago and represented Illinois in the Senate before becoming president, will be on official business representing the bid by the United States to host the Olympics, Gibbs said Monday.

"I don't think there's any doubt that the president is enormously proud of Chicago and would be enormously proud of ... the city hosting the bid," Gibbs said, later adding: "I think you'll hear directly from both the first lady and the president about what they think the Olympic Games mean and how Chicago hosting the Games fits with what we all believe the Olympics means."

Chicago is vying for the Summer Games against Madrid, Spain; Tokyo, Japan; and Rio de Janeiro, Brazil. Leaders from Brazil, Spain and Japan are expected to also make in-person pitches.

Obama held an event at the White House earlier this month to rally for Chicago as the host city.

"I may live in Washington these days, but I've called Chicago home for nearly 25 years," Obama said.

While in Denmark, the president and first lady will meet with Queen Margrethe II and her husband, Prince Henrik, the White House said in a release. Obama also is scheduled to meet with Prime Minister Lars Løkke Rasmussen.