WASHINGTON (CNN) -- Freshman U.S. Rep. Alan Grayson refused to back down Wednesday from remarks made on the House floor the night before, in which he said the Republican health care plan calls for sick people to "die quickly." 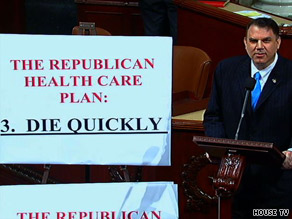 In fact, Grayson, a Democrat who represents a central Florida swing district that includes Orlando, made another floor speech in which he apologized to the dead and their families for not acting sooner on health care reform. He then defended both speeches on CNN's "The Situation Room."

"What I mean is they have got no plan," Grayson told Wolf Blitzer. "It's been 24 hours since I said that. Where is the Republican plan? We're all waiting to see something that will take care of the pre-existing conditions, to take care of the 40 million Americans who have no coverage at all.

"That's what I meant when I said that the Republican plan is don't get sick. And if you do get sick, die quickly."

Republicans pounced on Grayson's late-night speech and demanded an apology.

"That is about the most mean-spirited partisan statement that I've ever heard made on this floor, and I, for one, don't appreciate it," Rep. Jimmy Duncan, R-Tennessee, told Politico.

On Wednesday, Grayson apologized, but it wasn't the apology the Republicans wanted.

Citing a Harvard University study released this month that said 44,000 Americans die each year because they have no health insurance, Grayson called on Democrats and Republicans "to do our jobs for the sake of those dying people and their families."

"I apologize to the dead and their families that we haven't voted sooner to end this holocaust in America," he said.

That prompted National Republican Congressional Committee spokesman Ken Spain to issue a stinging rebuke, saying Grayson is "doubling down on his despicable remarks, and he is dragging his party with him."

"This is an individual who has established a pathological pattern of unstable behavior," Spain said. "He is derailing the national debate on health care reform and embarrassing his constituents as a result."

But in a spirited discussion on CNN that included Democratic strategist James Carville and Republican strategist Alex Castellanos, Grayson stood his ground. He rejected the suggestion that his remarks were the political equivalent of South Carolina Republican Rep. Joe Wilson's shout of, "You lie," at the president during his nationally televised speech on health care.

"I didn't insult the president in front of 40 million people," he said. " ... When you don't have a plan, what that means is your plan is don't get sick. So what I said is true. What Joe Wilson said, on the other hand, is false."

Castellanos insisted that Republicans agreed with the Democrats on pre-existing conditions and would "stand with him 100 percent" if the president added such Republican-backed proposals as tort reform and allowing citizens to shop across state lines for insurance -- a strategy Democrats say will drive insurance companies into the states with the most lax regulations.

"The congressman is at least giving the chance for the Republicans to look responsible. It's not fair to say that the Republicans have no plan. They actually do," said Castellanos, whose campaigns include those of George W. Bush in 2004, Mitt Romney in 2008, Florida Gov. Jeb Bush and the late Sen. Jesse Helms of North Carolina in the 1990s.

Carville, who was Bill Clinton's lead strategist during his successful run for the presidency in 1992 and worked on Hillary Clinton's campaign last year, congratulated Grayson for having "the courage to go up and say what he said."

But Carville backed away from Grayson when the congressman said that Republicans he believes are obstructing health care reform are "foot-dragging, knuckle-dragging Neanderthals."

"I would call [them] regressive as opposed to Neanderthal," Carville said.

Grayson also rejected comparisons between his comments and those of some Republicans, including former Alaska governor and GOP vice presidential candidate Sarah Palin, that the Democratic reform plan called for "death panels" to decide who would get life-saving treatments.

"I said to myself, 'I wish Sarah Palin read the bill.' That's not what this bill says. That's a scare tactic," he said. "What I said is the God's honest truth."

Grayson said he decided to deliver his after-hours speech Tuesday after the Harvard study was released and he realized "we cannot go on any longer in this country where people cannot afford health care, where the coverage they got is good until they need it."

Calling for universal health care, he slammed "whoever it is that's causing the Republicans to fight tooth-and-nail against anything, absolutely anything, to have every vote come down to being 257 to 175 in the House, over and over and over again."

"Those are the people who are really disserving Americans," he said.

All About Health Care Policy • U.S. House of Representatives