COPENHAGEN, Denmark (CNN) -- After flying through the night for seven hours aboard Air Force One, nobody would blame President Obama for being at least slightly groggy when he arrived in Copenhagen, Denmark, for a quick four hours to make the final pitch for Chicago to host the 2016 Olympics. 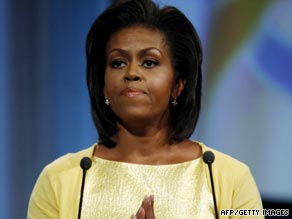 Michelle Obama's speech in Copenhagen focused on her roots in Chicago and her father's battle with MS.

Maybe that explains why the president seemed to snag the silver medal while first lady Michelle Obama, who's been in Copenhagen a couple of days, clearly took the gold with an emotional speech focused on her family's roots in the South Side of Chicago, Illinois, and her late father's battle with multiple sclerosis.

"Sports were a gift I shared with my dad, especially the Olympic Games," Obama said in her portion of the U.S. delegation's final presentation to the International Olympic Committee. "Some of my best memories are sitting on my dad's lap, cheering on Olga and Nadia, Carl Lewis and others for their brilliance and perfection.

The mention of the Paralympic Games was significant because a good bit of Obama's speech tugged at the heartstrings by focusing on how her father was diagnosed with MS in his early 30s, leaving him nearly unable to walk. She spoke in a halting voice about how he kept getting sicker but still taught her how to play sports while propping himself up on crutches.

"My dad was my hero. And when I think of what these games could mean to people all over the world, I think of people like my dad, who face seemingly insurmountable challenges, but they never give up."

Watch as the president and Mrs. Obama speak in Copenhagen »

IOC members will be voting Friday; results will be announced after 12:30 p.m. ET.

"I think Chicago could not have made a better presentation. Now it's up to the IOC," President Obama said. "Only thing I'm upset about is I followed Michelle, which is never good."

"We want to share our city with the world," Daley told IOC members. "You have my commitment that Chicago will work every day for the next seven years to be an Olympic city that you and the world will be proud of."

The president gave the final word, saying that after moving around the world as a child, he finally settled in Chicago.

"I came to discover that Chicago is that most American of American cities, but one where citizens from more than 130 nations inhabit a rich tapestry of distinctive neighborhoods," Obama said.

"Nearly one year ago, on a clear November night, people from every corner of the world gathered in the city of Chicago or in front of their televisions to watch the results of the U.S. presidential election," he told IOC members. "Their interest wasn't about me as an individual. Rather, it was rooted in the belief that America's experiment in democracy still speaks to a set of universal aspirations and ideals.

"There is nothing I would like more than to step just a few blocks from my family's home and with Michelle and our two girls welcome the world back to our neighborhood. At the beginning of this new century, the nation that has been shaped by people from around the world wants a chance to inspire it once more."