Some credit card companies rush to act before new law

WASHINGTON (CNN) -- If you hold a Discover credit card, you're in luck -- the company has decided to freeze interest-rate hikes until a new credit card consumer protection bill takes effect in February. 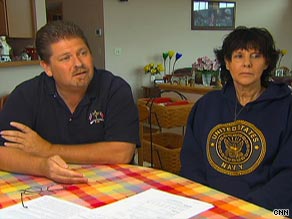 Chuck and Jeanne Lane of Ohio have excellent credit, but their monthly credit card bill more than doubled.

Bank of America was the first company to freeze its rates. Both moves come after outrage over credit card companies jacking up rates, increasing minimum payments and raising penalty fees before the new consumer protection law -- which would bar sudden increases -- is phased in.

Rep. Betsy Markey, D-Colorado, and 17 other lawmakers sent letters to credit card banks asking them voluntarily to freeze their rates while Congress decides whether to move up the phase-in date for the new law to December.

Markey said a CNN report about Ohio couple Chuck and Jeanne Lane inspired her to act. The Lanes said they did everything right but felt bankrupted by a sudden change in their credit card payments.

The Lanes have a low-interest Chase credit card that was sold as a way to consolidate large debts and pay them down responsibly over time. The Lanes showed CNN that they have excellent credit, have never been late with a payment and in the last two years cut their outstanding balance in half. They said they were shocked when Chuck opened their online statement to discover Chase had driven up their monthly payment from $370 to $911.

"I was devastated," Chuck Lane said.

When Lane called the bank to complain, he was told he could continue to make his old payment if he agreed to an ever-increasing interest rate.

"I told them this was the worst economic time in history practically," he said. "I work for a small company. We have laid off 30 percent of our work force. I just took a 10 percent pay cut this morning, and this is what you are going to do to us?"

A Chase spokeswoman said the higher rate had nothing to do with the Lanes' credit or payment history, but rather that the company doubled the minimum payments for more than 1 million cardholders in August because it wants them to pay down more of their principal.

In a statement to CNN, the company said tens of millions of Chase loans "have been paid back in less than 24 months" but a small percentage of customers have not made as much progress and "our desire is to have these balances paid back in a reasonable period of time."

Joe Ridout, an advocate with Consumer Action, said, "Truly, this is the the single most abusive credit card change in terms that I've ever seen."

Ridout described the tactic as bait-and-switch because Chase sold the cards as low interest and now is making the card unaffordable to many customers unless they switch to a higher interest rate.

"This is a very bogus compromise, and what the bank should really do is honor their original promises." Ridout said.

Consumer Action is fielding hundreds of complaints from consumers who are seeing their banks raise rates, minimum payments and penalty fees before the new law takes effect.

"It's really touched off a chase to the bottom among credit card banks," Ridout said, "because they know that after that date it will be much more difficult to change the terms when a cardholder pays on time and commits no infractions."

But the industry insists it's not trying to skirt the new law.

Scott Talbott, vice president with the Financial Services Roundtable, said the companies he represents are "struggling in a tough economy and trying to provide credit for consumers."

The reasons the rates are going up or credit lines are decreasing are based on two factors: a change in behavior -- a missed or late payment, or exceeding credit limits; and the economic times.

"We're in a recession, so the general risk of nonpayment has increased across the board, so credit card companies are adjusting to that risk by increasing interest rates or decreasing credit lines, even if the customer has a perfect history," Talbott said. "A very small percentage may see an increase in their interest rate or a decrease in their line of credit."

Besides the letter from Markey and her colleagues, Congress is looking at taking other action.

Reps. Barney Frank, D-Massachusetts, and Carolyn Maloney, D-New York, have introduced legislation that would move up the date when the new protection laws take effect from February 22 to December 1.

Earlier this week, Sen. Carl Levin, D-Michigan, and three other lawmakers asked the Federal Reserve to begin collecting data on credit card practices so changes can be monitored and so Congress can see if card companies comply with the new law. Some of this basic data -- such as the different terms offered to consumers, what credit costs consumers and how available is it -- has never been systematically collected.

And Congress will have another chance to beef up consumer protections when it takes up financial regulatory reform this year. Lobbying by the financial industry is intense.

And Frank's committee already has excluded a provision that the Obama administration proposed, which would have guaranteed consumers clear, simple options to choose from when they're shopping for credit cards, mortgages and other credit products.

The Lanes said they're deciding between paying the new minimum on their Chase card, or paying for surgery Jeanne needs next month and supporting Chuck's son in college.

"I've had this card since the early '90s, and I've never missed a payment. I have excellent credit," she said.

She said she's angry with her bank: "They have no respect for the American people. All they think about is the almighty dollar for themselves."

CNN's Kevin Bohn and Emily Sherman contributed to this report.

All About Credit Card Debt