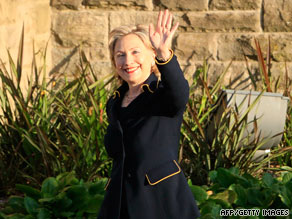 There still are those who want to undermine that process, she warned, trying to derail it with "thuggish tactics."

In the Stormont Assembly were members of at least six political parties -- men and women, she said, "who once were sworn enemies who now work side by side."

"Please know that the Obama administration and the United States is committed to helping you finish your journey -- to put far behind you the long years of division and conflict, to build confidence and trust across all communities and political parties, and to honor the hopes and sacrifices of your people by making whole and permanent Northern Ireland's emerging peace," she said, promising the United States would be supportive without meddling.

Clinton cited the worldwide economic crisis as a major challenge to the peace process.

"Northern Ireland is now facing a new challenge with the global economic downturn, which threatens some of the gains you have made in the past decade," she said.

After the speech, she met with a large group of American and Northern Ireland business leaders who discussed investment possibilities in the province.

Clinton recalled her previous visits to the province and the engagement of her husband, former President Clinton, in pushing for peace.

In the 14 years since their first trip, she said, "I have often wondered about the children whose lives were saved because of what you do."

The shootings raised fears that Northern Ireland could be plunged back into the sectarian violence that left about 3,600 people dead over the course of three decades. But political leaders from across the spectrum condemned the killings, and the violence did not escalate.

Clinton is in Belfast as part of a six-day trip to Europe and Russia. The centerpiece of the trip will be her visit to Moscow, Russia.

At the top of the agenda is working toward an agreement to take the place of the Strategic Arms Reduction Treaty II arms control pact, which expires December 5, as well as the newly created bilateral presidential commission that is working on a broad range of issues, from arms control to health.

All About Northern Ireland • Hillary Clinton