MOSCOW, Russia (CNN) -- An impassioned U.S. Secretary of State Hillary Clinton, speaking to students at Moscow State University on Wednesday, admonished those in the U.S. and Russian governments who haven't moved beyond a Cold War mentality. 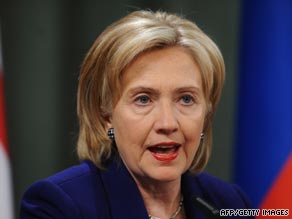 Hillary Clinton criticized people "living in the past" over the Cold War.

Clinton said such people are "living in the past" and aren't able to cooperate on issues such as missile defense because they "don't trust each other." She also called on the nations to find common ground, saying they "shouldn't end all cooperation" just because they can't agree on everything.

"Let's be smarter than our past," Clinton said, offering to bring a "new attitude bring to the relationship."

Following those meetings, Clinton spoke about surmounting historical difficulties in U.S.-Russian relations, changing a relationship "once defined by the shadow of mutually assured destruction into what is based on mutual respect and, over time, increasingly mutual trust."

"We are different countries; we have different historical experiences, different perspectives," she said. "But we are planting those disagreements in a much broader field of cooperation, and hopefully we are enriching the earth in which this cooperation can take root."

Clinton wraps up her trip to Russia on Wednesday.