WASHINGTON (CNN) -- Secretary of State Hillary Clinton said Friday that President Bush's administration was "unrealistic" in its dealings with the war in Afghanistan. 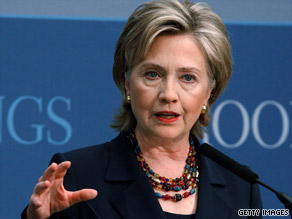 Secretary of State Hillary Clinton says the Bush administration was unrealistic in its dealings with Afghanistan.

Clinton told CNN the Bush administration was unrealistic both in terms of the number of U.S. soldiers it committed to the conflict and in its relationship with certain Afghan political leaders.

The war was "under resourced" since its start in 2001, she said, and she indicated the Bush administration's attention was improperly shifted to Iraq.

Clinton also said Friday that she is "very optimistic" a decent health care reform package will be enacted. She refused, however, to offer any opinion regarding the specifics of what should go into such a package.

"I have a different role now" than she did when she took the lead in attempting to craft a health care plan during her husband President Clinton's administration, she told CNN. "I'm going to cheer from the sidelines."