WASHINGTON (CNN) -- Sen. John Kerry cautioned against President Obama's plan to raise troop levels in Afghanistan at a time when he says the country's government remains in turmoil over last month's national elections. 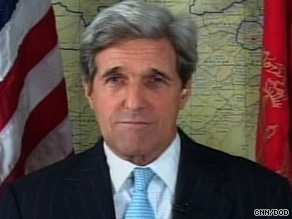 "It would be entirely irresponsible for the president of the United States to commit more troops to this country, when we don't even have an election finished and know who the president is and what kind of government we're working in, with," Kerry told CNN's John King in an interview set to air Sunday on CNN's "State of the Union."

In a speech earlier this month at the International Institute for Strategic Studies, a British think thank, McChrystal stressed the importance of connecting with the Afghan people, who he said are "frustrated" that more has not been accomplished in the nearly eight-year-old war.

Obama and his advisers have held five meetings in recent weeks to discuss U.S. strategy in Afghanistan and Pakistan, as they weigh a call from Gen. Stanley McChrystal, the top U.S. commander in Afghanistan, for as many as 40,000 additional troops in Afghanistan.

"When our own commanding general tells us that a critical component of achieving our mission here is, in fact, good governance, and we're living with a government that we know has to change and provide it, how could the president responsibly say, 'Oh, they asked for more, sure -- here they are' ?" Kerry said.

Complaints of voter irregularities have dogged the Afghanistan election and the United States' mission there. The top United Nations official in Afghanistan, Kai Eide, said at a news conference earlier this month that the vote was marred by "widespread fraud."

The Independent Election Commission is expected to soon finish an audit and recount of suspicious ballots. The independent commission is a "constitutional body" that conducts "free and fair elections" in an "impartial way" according to its Web site.

Election tallies have yet to be certified because of the allegations. Last month, final uncertified results showed Karzai with 54 percent of the vote.