(CNN) -- The United States is fighting wars in Iraq and Afghanistan but there are thousands of troops caught-up in a very different battle and President Barack Obama is promising to win it. 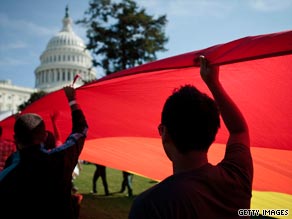 Obama says he will reverse U.S. law and military tradition to assure a place in the armed forces for gay and lesbian personnel.

"We should not be punishing patriotic Americans who have stepped forward to serve this country," he said over the weekend. "We should be celebrating their willingness to show such courage."

From the very start of his campaign for the White House, Obama has spoken-out on behalf of gay and lesbian Americans. They responded with what activists described as unprecedented support. Now they're waiting to see results.

Officially, only heterosexuals are considered fit to serve. Bill Clinton promised to change that when he ran for president, but he ran into determined opposition from the military brass and Congress.

The result of the controversy was a compromise called "Don't Ask, Don't Tell." Sexual orientation is ignored if it's kept secret.

Even so, in the 16 years since, 13,000 men and women have been forced out of uniform. Should gay and lesbian Americans be able to serve openly in the military? Sound Off below

Armies from Israel to Australia have lifted barriers on homosexuals. But in many nations the ban still stands and in the U.S. it remains written into law.

"The law says that it would be harmful to good order, discipline and morale if we had open homosexuals in the military," said Elaine Donnelly of the Center for Military Readiness.

Obama has never backed away from his promise but he's turned to other business first: Two wars, a crippling recession and reform of the U.S. health system.

Congressional leaders say they can be convinced this time, if the military agrees.

"At least some of the military leaders have got to tell Congress that yes, this can be done," said Carl Levin, chairman of the Senate Armed Services Committee.

Obama's advisors say they talking to the generals and trying to push forward, but they aren't promising quick results. The U.S. military has its hands full fighting distant wars and the White House isn't about to set off another one at home.