WASHINGTON (CNN) -- As President Obama navigates his way through a series of issues as controversial as they are vital, he's getting a yellow flag from the American people. 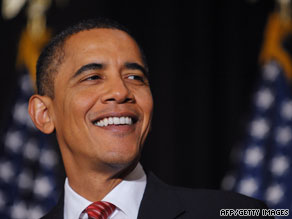 For the first time since Obama took office, fewer than half of Americans agree with the president on issues important to them, according to a CNN/Opinion Research Corp. poll released Tuesday. A majority, 51 percent, disagree -- a jump of 10 percentage points since April.

Despite the majority disagreement on issues, the poll also found the president's approval rating remains in the healthy mid-50s. And two-thirds of Americans say he has the personal qualities a president should have.

"It's awfully early yet, but this president might be shaping up to be a little like Ronald Reagan, where people actually didn't often agree with Ronald Reagan's ideas, but they loved the guy," said Paul Begala, a Democratic strategist and CNN contributor.

"They still like the messenger. That's important for Obama because he'll be able to look presidential, and Americans may respond to that as he's trying to make a pitch for his health care plan, financial reform, whatever he decides to do in Afghanistan and Iran," said Keating Holland, CNN's polling director.

Watch more on what the poll numbers mean »

The poll shows it's a lot harder to keep people liking you when you're governing than when you're politicking. It's a familiar path for presidents, who often start out popular but see their numbers drop as they get down to the nitty-gritty.

In Obama's case, legislation to overhaul health care has not been kind to his numbers.

And about the Nobel Peace Prize, even the president seems stunned he got it.

"To be honest, I do not feel that I deserve to be in the company of so many of the transformative figures who have been honored by this prize," Obama said after the award's announcement.

Americans apparently agree. About a third believe the president deserved the prize, according to this week's CNN/Opinion Research poll. Fifty-six percent say they disapprove of the Nobel Prize Committee's decision to honor him, the survey found. Still, there's a hometown hero effect here, with almost 70 percent saying they are proud an American president won it, the poll said.

And then further proof of that adage that Americans like their politicians most when they are not running for anything, the most popular person in the Obama administration is not the still-popular president.

It's Secretary of State Hillary Clinton. Sixty-five percent of Americans view Clinton favorably, outshining even first lady Michelle Obama by a percentage point, according to the survey.

"It's not surprising that Clinton tops Barack Obama on the favorable ratings," Holland said. "Secretaries of state don't get blamed for economic problems or unpopular domestic policies, and they often don't get the same share of the blame as the commander in chief for international slip-ups either. But typically, the first lady gets even better favorable ratings than the secretary of state, so the fact that Clinton's numbers are slightly better than Michelle Obama's is a bit surprising."

Clinton is in a nonpolitical position, doing policy work in an area in which she really likes working. She was once seen as a sharply divisive politician, the "also-ran" of the 2008 Democratic primary season.

And for the president -- there is a lesson in that. Poll numbers have a way of changing. Nothing like, say, a health care overhaul bill that works, that might bring more people on board as to agreeing with his policies.

The CNN/Opinion Research poll was conducted Sunday through Thursday, with 1,038 adult Americans questioned by telephone. The survey's sampling error is plus or minus 3 percentage points.