WASHINGTON (CNN) -- House Speaker Nancy Pelosi said Thursday that Congress is set to consider a measure increasing the amount of money the federal government can lend to small businesses. 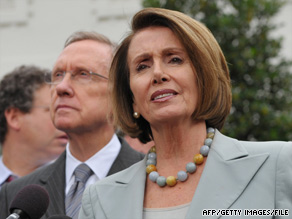 The House of Representatives will debate a bill next week increasing the ceiling on Small Business Administration loans from $2 million to $5 million. The bill, backed by President Obama, also would increase the maximum size of SBA-backed microloans from $35,000 to $50,000.

"Small business is the engine of job creation and capital creation in our country," Pelosi told reporters Thursday. "The issue of jobs is [always] important to us."

The moves highlight a growing debate in the White House and on Capitol Hill over whether to push for a second economic stimulus package. The unemployment rate has continued to climb in recent months, and is now near 10 percent.

Most top Democrats refuse to refer to any new measure as a "stimulus," partly out of concern that it will raise questions about the effectiveness of the $787 billion recovery package enacted in February.

Republicans have slammed February's package as a failure.

"We do not have plans for an additional stimulus package," Pelosi said Wednesday. "But we do have plans to stimulate the economy in the ... work that we are doing here."

Wednesday, House Democrats convened a forum of economists to debate the state of the economy, with a specific focus on job creation. Mark Zandi, chief economist of Moody's Economy.com, warned that the "possibility of the economy slipping back into recession next year [is] uncomfortably high."

The measure is only one of an array of new measures being floated by White House and congressional leaders.

Among other things, Congress is currently working on legislation to extend unemployment benefits. An estimated 1.3 million jobless workers will have run out of their benefits by the end of the year, according to the National Employment Law Project.

The House has already approved an extension. The Senate has amended the bill, but not yet voted on it. Both parties say they want to extend benefits but disagree over how to pay for it and how to handle amendments to the bill.

In the Senate proposal, unemployment benefits would be extended by up to 14 weeks in every state and then another six weeks on top of that in states where the unemployment rate tops 8.5 percent. Senate Democrats say the measure, projected to cost $2.4 billion, would be paid for by extending an add-on tax for employers under the Federal Unemployment Tax Act.

The administration is also backing an extension of the federal subsidy now offered to unemployed workers who opt to continue their health insurance coverage from their former employers under what is known as COBRA.

Under the original provision passed in February's economic recovery act, the government agreed to pick up 65 percent of the cost of COBRA premiums for up to nine months for workers laid off between September 1, 2008, and December 31, 2009.

Obama has also proposed sending a $250 economic relief payment to seniors, veterans and the disabled to compensate for the fact that there will be no cost-of-living adjustment made to Social Security benefits in 2010 due to a lack of inflation.

The $13 billion measure would generate a second round of payments, following emergency payments of $250 sent out earlier this year.

Democrats also are looking at a possible extension of the $8,000 tax credit for first-time homebuyers. The credit -- aimed primarily at individuals making under $75,000 or couples earning less than $150,000 -- is set to expire November 30.