Public option would lead him to filibuster, key senator says 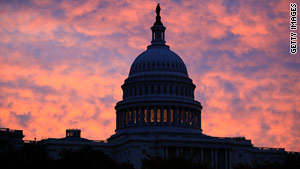 Washington (CNN) -- Independent Sen. Joseph Lieberman said Tuesday he would join a Republican filibuster to block the final vote on any health care bill that has a government-run public health insurance option.

Lieberman said he would support a vote to launch debate on the health care bill but would oppose a motion to end debate if the public option remains in the legislation. Democrats would need 60 votes in the 100-member Senate to close debate on the bill, and the Democratic caucus has 60 members, including Lieberman.

"I can't see a way in which I can vote for cloture on any bill that contained a creation of a government-operated and run insurance company," the Connecticut senator said. "It's just asking for trouble."

Also Tuesday, two other conservative-leaning Democratic senators, Ben Nelson of Nebraska and Mary Landrieu of Louisiana, said they would decide how to vote once they see the final bill.

"I'm not going to make any kind of commitment until I see the bill," Nelson said, adding that he has not given Reid any assurance or "secret" acknowledgment of support.

Reid needs the support of Lieberman, Nelson, Landrieu and several other conservative or moderate caucus members to ensure that he has enough votes to prevent Republicans from blocking action on a health care bill. His Republican counterpart, Senate Minority Leader Mitch McConnell of Kentucky, on Tuesday promised a filibuster against both introducing the health care bill and later closing debate on it.

Reid's decision to include any form of public option was a major victory for the more liberal wing of the Democratic Party. He included the state opt-out provision to try to win support of conservative and moderate caucus members.

Interactive: What is the public option?

Video: Lieberman may opt out

Individual states would have until 2014 to decide whether they wanted to opt out, according to Reid, a Nevada Democrat facing tough re-election prospects next year.

Opting out would require action by state legislatures, two Democratic sources told CNN on Tuesday. If the state's governor vetoed the bill, the legislature could still enact it by overriding the veto, they said.

Reid has been melding legislation from the more conservative Senate Finance Committee and the more liberal Senate Health, Education, Labor, and Pensions Committee.

The Health Committee included a form of the public option in its bill, while the Finance Committee did not.

On the House side, Speaker Nancy Pelosi has insisted the chamber pass a health care reform bill that includes a public option.

Republicans oppose a public option, saying it would drive private insurers out of the market and eventually lead to a government takeover of the health care system.

The president has not, however, indicated that he would veto a bill without such a provision.

Several top Democrats have previously expressed concern that the traditionally conservative Senate would not pass a bill with a public option.

Reid's health care bill, which will be given a cost assessment by the nonpartisan Congressional Budget Office, also includes a provision from the Finance Committee bill allowing for the creation of nonprofit health care cooperatives that would negotiate collective insurance coverage for members.

The majority leader's strategy of publicizing his intention was risky, multiple sources said.

Reid said Tuesday that much work remains in the amendment process of debating the bill, indicating possible compromises in the complex legislation that overhauls the nation's health care system.

"There are a lot of senators, Democrat and Republicans, who don't like part of what's in this bill," Reid said. Asked specifically about Lieberman's opposition to a public option, Reid said Lieberman would support opening debate on the bill, "and I'm sure he'll have some interesting things to do in the way of an amendment.

"But Joe Lieberman is the least of Harry Reid's problems," he said.

Lieberman, asked by CNN about a possible Democratic backlash against his stance, said he was thinking of what is best for Connecticut and the country.

"I was re-elected as an independent," Lieberman said. "I've got an obligation to the voters of Connecticut and I've got an obligation most of all to do what's best for the United States of America, so I'm not going to worry about the political ramifications in a way that will stop me from doing what I think is right."

"When I came here, we had Republicans and Democrats work together," Reid said. "But you can't dance if your partner is unwilling to get off the chair."

On Monday, Reid said he hoped to eventually win over Maine Sen. Olympia Snowe, the lone Republican to back the Finance Committee bill. Snowe has indicated her preference for a "trigger" provision that would mandate creation of a public health insurance option in the future if specific thresholds for expanded coverage and other changes were not met.

Snowe issued a statement Monday saying she was "deeply disappointed" about Reid's decision on the public option. She said that a decision in favor of a trigger "could have been the road toward achieving a broader bipartisan consensus in the Senate."

Reid, in turn, said he was "disappointed that the one issue, the public option, has been something that's frightened" Snowe.