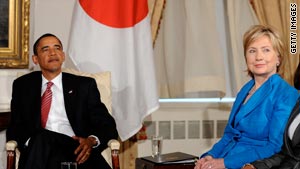 (CNN) -- Some Democrats had dubbed the possibility of a Barack Obama-Hillary Clinton pairing last year as a "dream ticket," though the notion that the two once-bitter primary rivals would team up always seemed far-fetched.

But then-Democratic presidential nominee Barack Obama was more seriously considering picking Clinton as his running mate than any of his senior aides realized, according to a forthcoming book by former Obama campaign manager David Plouffe.

Yet in the end, it may have been her husband President Clinton -- who had made headlines for his outbursts on the campaign trail during the primary season -- that ultimately scuttled the possibility.

In the book, excerpts of which are running in the new issue of Time magazine, Plouffe said Obama took both him and senior aide David Axelrod by surprise when he insisted on including Clinton on the initial list of potential picks for the No. 2 spot on the ticket.

"Obama was clearly thinking more seriously about picking Hillary Clinton than Axelrod and I had realized," Plouffe writes. "He said if his central criterion measured who could be the best VP, she had to be included in that list."

While Obama continued to consider picking Clinton throughout the summer of 2008, he ultimately eliminated her name from the list in early August, fearing, Plouffe writes, that there "were just too many complications outweighing the potential strengths."

"I think Bill may be too big a complication," Plouffe quotes Obama as saying. "If I picked her, my concern is that there would be more than two of us in the relationship."