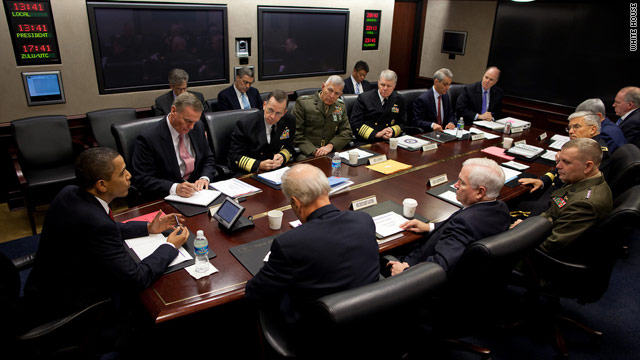 President Obama meets on Afghanistan with the Joint Chiefs of Staff in the Situation Room at the White House on Friday.
STORY HIGHLIGHTS

Washington (CNN) -- President Obama huddled with the Joint Chiefs of Staff and other top military advisers at the White House on Friday as the administration continued its sweeping review of U.S. strategy in Afghanistan.

Each branch of the armed services was given a direct opportunity to tell Obama the effect on the military if a large number of additional forces are sent to Afghanistan, two military sources told CNN's Barbara Starr.

The meeting was the seventh in a series of high-level discussions being held in part to forge a consensus on how best to confront Taliban and al Qaeda militants threatening the governments of Afghanistan and Pakistan.

"The president wants to get input from different services," White House spokesman Tommy Vietor said earlier this week. "It's a chance to consult with uniformed military leadership as a part of his [Afghanistan-Pakistan] review."

The potential for a major expansion of the number of U.S. soldiers in Afghanistan comes with some misgivings from the military chiefs. The Army and Marine Corps have expressed concerns that it could make it tougher to give troops promised time at home with their families between overseas tours.

The White House strategy review is being conducted against a backdrop of rising U.S. casualties in Afghanistan and increased Taliban violence.

October has already become the deadliest month for U.S. forces since the war began in late 2001, with the deaths of 56 American troops.

The presidential campaign has become increasingly contentious as Abdullah demanded the removal of the country's election chief and 200 other staffers of the election commission to ensure a fair runoff.

Abdullah and others have charged that massive fraud occurred in the first round of voting on August 20. The initial results gave Karzai the win, but a subsequent review by a U.N.-backed panel of election monitors threw out nearly one-third of Karzai's votes because of "clear and convincing evidence of fraud."

The result left Karzai short of the 50 percent needed to avoid a runoff. After a flurry of meetings with U.S. and U.N. officials, the Afghan president agreed to the runoff.