Months into Obama's presidency, promise of 'change' is a slow go 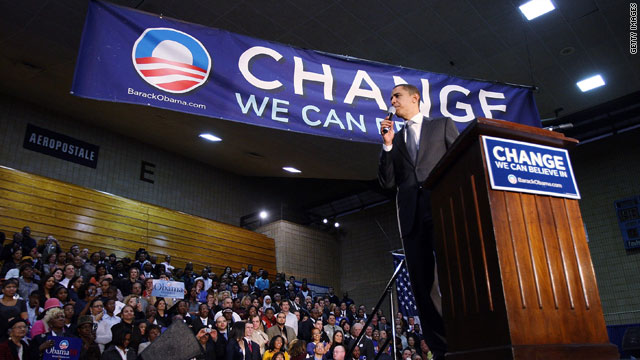 Washington (CNN) -- On that unusually balmy Chicago night a year ago, the candidate who campaigned on what he called the "fierce urgency of now" became the president-elect who needed time.

"The road ahead will be long. Our climb will be steep. We may not get there in one year or even in one term," Barack Obama told the crowd in Grant Park. And he still needs time to turn a myriad of campaign promises into policy.

The list of the undones is long, varied and mostly difficult -- immigration reform, new financial market regulations and a game-changing energy bill.

And compounding problems on the president's lengthy to-do list is that 2010 is an election year, generally an inefficient time for lawmaking.

Obama can put down several major campaign promises as "in the works."

On the campaign trail in December 2007, he promised to bring troops home from Iraq in 16 months and to "finish the fight against al Qaeda in Afghanistan."

Those 16 months slipped to 19. As many as 50,000 troops may stay on the ground in Iraq, but the majority will be out next year. The president sent more than 20,000 more troops to Afghanistan and is considering sending more.

He has ordered the Guantanamo Bay prison closed, though he's likely to miss his self-imposed January deadline.

On the domestic side, two issues have dominated the first 10 months of the Obama era -- health care and the economy -- and the president can claim progress on both.

The economy was stoked by a nearly $800 billion stimulus bill, which he promised "will likely save or create 3 to 4 million jobs; 90 percent of these jobs will be created in the private sector."

But the president's claim is not measurable.

The crown jewel of the president's promises, health care reform, is a work in progress. Two things the president opposed in the campaign, mandatory insurance and fines for people who don't have it, are likely to end up in the bill.

If 10 months is too short a time to keep promises, it's been plenty of time to break them, starting with transparency. Promised negotiations televised on C-SPAN didn't happen nor did the promise of posting bills on the Web before he signed them. Not always, at least.

There are lobbyists in the White House, despite a promise that, "they will not work in my White House."

The Pulitzer Prize-winning Web site Politifact.com tracks more than 500 Obama campaign promises. The majority of them are rated "no action."

Obama has three years and two months to take action on them.