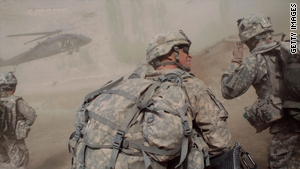 U.S. Army soldiers are picked up from a mission on October 15, 2009, in Paktika province, Afghanistan.
STORY HIGHLIGHTS

"Reports that President Obama has made a decision about Afghanistan are absolutely false," Jones, who has a low public profile, said in a statement. "He has not received final options for his consideration, he has not reviewed those options with his national security team, and he has not made any decisions about resources. Any reports to the contrary are completely untrue and come from uninformed sources."

The statement was issued shortly after CBS News' veteran Pentagon correspondent David Martin reported that Obama has "tentatively decided" to send four more combat brigades to Afghanistan and thousands more support troops starting early next year. That would bring the total number of new troops to close to the 40,000 more troops originally requested by Gen. Stanley McChrystal, the U.S. commander in Afghanistan.

Two other senior administration officials told CNN that the CBS report and other similar speculation is false.

The two senior administration officials suggested the information is being leaked by Pentagon sources who are trying to box in Obama by setting public expectations that he will send close to 40,000 more troops to Afghanistan, as requested by McChrystal.

"People at the Pentagon are trying to force a certain outcome," one of the senior administration officials told CNN.

Both senior administration officials insisted Obama has not made any decision on troop levels in Afghanistan, noting that the president has another meeting with his national security team Wednesday to receive a final set of recommendations from the Pentagon brass. The senior officials said the president could not possibly make a decision on troop levels before receiving the Pentagon's final recommendations.

Meanwhile, White House Press Secretary Robert Gibbs said Monday it was "doubtful" that Obama will announce a troop decision before he leaves for a trip to Asia on Thursday. Gibbs added it was also unlikely that Obama would make such an announcement during his trip to Asia, which is largely focused on economic matters and separate diplomatic issues like North Korea's nuclear program.

Obama is scheduled to return from Asia on November 20, after stops in Japan, Singapore, China, and South Korea. Officials have suggested Obama could announce a troop decision shortly before or after Thanksgiving.

Gibbs has said repeatedly the decision will be revealed in "coming weeks."