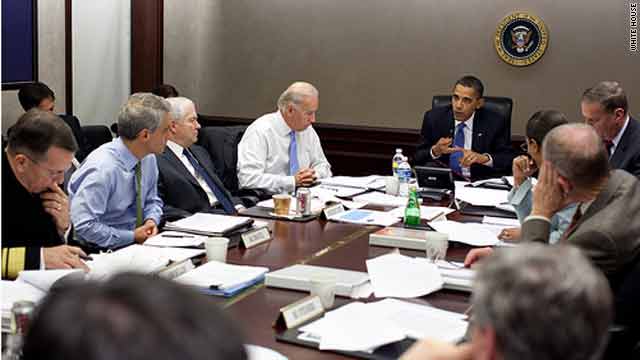 Washington (CNN) -- President Obama told his war council Wednesday that the U.S. troop commitment to Afghanistan is not open-ended, and he asked for revisions to options he previously received for sending more troops, a senior administration official told CNN.

The president's questions at the meeting could change how many troops eventually are sent to Afghanistan, as well as how long they would be there, according to the senior administration official.

Before the meeting, Gen. David Petraeus, the top U.S. military commander in the Middle East, said the meeting would continue evaluating how best to carry out the mission in Afghanistan.

Petraeus provided no specifics on options under consideration, but said the process is approaching completion.

"I think we are indeed nearing a decision on this very important topic," he said, emphasizing the need to focus on the mission of ensuring that Afghanistan "does not once again become a sanctuary or safe haven for al Qaeda and the kind of transnational extremists that carried out the 9/11 attacks."

Earlier, a senior administration official and a U.S. military official independently told CNN that one option presented to Obama calls for sending about 34,000 more U.S. troops to Afghanistan in addition to the 68,000 already committed to the country.

The troops would be spread across the country, mainly focusing in the south and southeast, where much of the fighting is, according to the official. The military official said the option has been a favorite at the Pentagon in recent weeks.

On Wednesday night, The Washington Post and The New York Times reported that concerns have been raised recently by the U.S. Ambassador in Kabul about Karzai's ability to rid his country's government of corruption and mismanagement.

All those factors could lead to "further refinements" or some "greater elements being considered," the official said, adding: "He's got to fine-tune this, put it all together ... for what direction best advances our interests."

Such reports are "absolutely false," Press Secretary Robert Gibbs said. Anyone who suggests otherwise, "doesn't have, in all honesty, the slightest idea what they're talking about."

White House officials would not say whether Wednesday's meeting with the war council would be Obama's last with that group before deciding on Afghanistan. They said he would continue to discuss the war effort in smaller groups in coming days, including during his trip to Asia, which starts Thursday.

The letter, signed by 10 GOP committee members, said success in Afghanistan will require local leaders and citizens being able to govern and secure their own country without "substantial" international assistance.

"This won't be perfect or easy, but it will allow America's fighting men and women to leave Afghanistan with honor, and it will enable Afghans to build a better, more peaceful future," the letter said. "That is our goal, and we must stay in the fight until is is won."

Republican leaders have criticized Obama for taking so long to decide on the troop request, but Petraeus said the process of analyzing the situation has been "very useful."

"There has been a refinement of objectives; there has been discussion of various courses of action," he said. "There have been explanations and discussions about how the civilian component of this will complement what is done by the work of our military troops. All in all, I think it has been a very productive couple of months that we have spent on this."

Also Wednesday, a new national poll showed Americans are split over whether Obama is taking too long to decide whether to send more U.S. troops to the war in Afghanistan.

The CNN/Opinion Research Corp. survey also indicated that, by a narrow margin, Americans think the president should listen to the recommendations of the generals in charge of U.S. troops in Afghanistan.

Roughly one in five Americans opposes more troops, yet also thinks that Obama should pay attention to the U.S. military leaders in that country, Holland said.

"That suggests that a lot of people who don't support a troop build-up are unaware of Gen. Stanley McChrystal's request for a bigger U.S. military presence there," he said. "And that, in turn, indicates that the military leaders in the field might provide Obama some political cover if he decides to increase troop strength there."

The poll also suggests widespread agreement among Americans that Afghanistan will never have a stable democratic government, with only one in 10 people questioned saying that will occur within a year, and one-third saying it will ever happen. Overall, 56 percent of Americans oppose sending more troops, while 42 percent favor increasing troop strength.