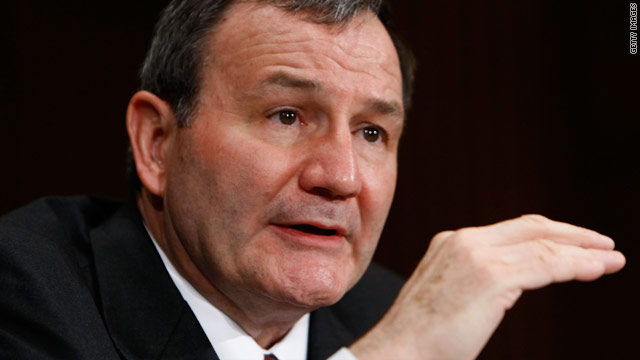 (CNN) -- The U.S. ambassador to Afghanistan has a unique résumé: he served two tours in the country as a general, training Afghan police and troops, before trading his uniform for a diplomat's business suit.

His career history may give Karl Eikenberry's word particular weight as President Obama struggles to come up with a way forward in Afghanistan.

Eikenberry sent private cables to Obama last week, urging the president not to rush to send more troops to Afghanistan -- although the top U.S. military commander there, Gen. Stanley McChrystal, wants 40,000 more pairs of boots on the ground.

Neither Eikenberry nor the White House would comment on the contents of private advice between the envoy and the president, but the reports alarmed Karzai enough that his office sought confirmation from the U.S. Embassy about them, a Karzai spokesman told CNN.

Karzai's office did not get the information it sought, the spokesman said.

Whatever Eikenberry told the president, the ambassador is unusually well versed in the military problems facing Afghanistan.

He retired from the Army after nearly 40 years of service with the rank of lieutenant general on April 28 -- one day before he was sworn in as ambassador, according to his State Department biography.

His long military career included time in Kabul as U.S. security coordinator and chief of the Office of Military Cooperation.

"Afghanistan has been at the center of my career since 9/11, when the terrorist-commandeered aircraft crashed into the Pentagon just below the office in which I was working," Eikenberry said at his Senate confirmation hearing in March.

"There is no silver bullet and no quick, cheap or easy solutions. There is no substitute for more resources and sacrifice," he said then.

But, he added: "There is no exclusively military solution to the issues we and our partners confront in Afghanistan."

He also advised the U.S. secretary of defense on China, Taiwan, Hong Kong and Mongolia, and was deputy director for strategy, plans and policy on the Army staff.

But he's not new to embassy life, having served as defense attache at the U.S. Embassy in Beijing, China.

Eikenberry has a master's degree in east Asian studies from Harvard, an advanced degree in Chinese history from Nanjing University in China, and is a certified translator from Mandarin Chinese.

He's also clearly attached to his wife, Ching, insisting in his Senate confirmation hearing that she accompany him to Kabul even though State Department rules barred spouses because the country is so dangerous.

He prevailed. He and his wife are hosting a dinner Saturday night in Kabul for a visiting U.S. lawmaker.