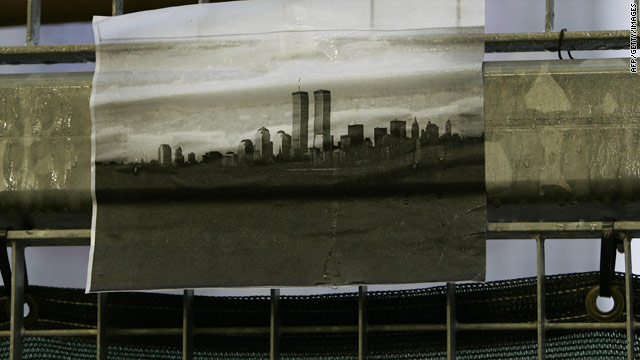 A photo of the World Trade Center towers hangs on the fence at ground zero in New York.
STORY HIGHLIGHTS

Holder was accused of risking Americans' security by treating the suspects like "common criminals" with a right to greater constitutional protections than they would receive in a military trial.

"These terrorists planned and executed the mass murder of thousands of innocent Americans. Treating them like common criminals is unconscionable," Texas GOP Sen. John Cornyn said in a written statement.

"The attacks of September 11th were an act of war. Reverting to a pre-9/11 approach to fighting terrorism and bringing these dangerous individuals onto U.S. soil needlessly compromises the safety of all Americans."

Cornyn asserted that Holder had irresponsibly put "political ideology ahead of the safety of the American people just to fulfill an ill-conceived campaign promise."

Texas Rep. Lamar Smith, the top Republican on the House Judiciary Committee, said the decision meant Mohammed and the other defendants would be able to claim new protections, including Miranda and Fourth Amendment rights against unreasonable search and seizure.

"Bringing terrorists to U.S. soil expands their constitutional rights and could result in shorter sentences," Smith claimed in a statement.

"America already gives terrorists more constitutional rights than any other country. The administration should not prioritize the rights of terrorists over the rights of Americans to be safe and secure," he said.

Smith argued that trying suspected terrorists in military commissions at Guantanamo Bay, Cuba, is the "most appropriate venue and safest option for the American people."

He also said the public needed to be "reassured that no terrorist will ever be released into our communities."

Sen. Joe Lieberman, I-Connecticut, agreed with Smith that suspected terrorists ought to be tried by military commissions.

"It is inconceivable that we would bring these alleged terrorists back to New York for trial, to the scene of the carnage they created eight years ago, and give them a platform to mock the suffering of their victims and the victims' families, and rally their followers to continue waging jihad against America," he said in a statement.

Lieberman argued that the updated military commission system recently signed into law by Obama "provides standards of due process and fairness that fully comply with the requirements established by the Supreme Court and the Geneva Conventions."

Some criticism also came from the Democratic side of the aisle. Moderate Virginia Sen. Jim Webb said he is "very concerned about the wisdom" of holding civilian trials instead of military tribunals.

"It will be disruptive, costly, and potentially counterproductive to try (the suspected terrorists) as criminals in our civilian courts," he warned.

Critics of military commissions, however, offered strong praise for Holder's decision. Anthony Romero, the head of the American Civil Liberties Union, called it "a huge victory for restoring due process and the rule of law, as well as repairing America's international standing, an essential part of ensuring our national security."

Romero argued that it would "have been an enormous blow to American values if we had tried these defendants in a (military commission) process riddled with legal problems."

Trying the suspects at the Guantanamo Bay detention facility would have amounted to "a miscarriage of justice in sham proceedings," Romero said.

Romero criticized Holder's decision to try five other detainees -- including Abd al-Rahim al-Nashiri, the alleged mastermind behind the 2000 bombing of the destroyer USS Cole -- by military commission.

"Time and again the federal courts have proven themselves capable of handling terrorism cases while protecting both American values and sensitive national security information. Justice can only be served in our tried and true courts," Romero said.

Rep. Jerrold Nadler, D-New York, said he supports Holder's decision to hold a trial in the city that bore the brunt of the September 11 attacks.

"Any suggestion that our prosecutors and our law enforcement personnel are not up to the task of safely holding and successfully prosecuting terrorists on American soil is insulting and untrue," Nadler said in a written statement.

"I invite any of my colleagues who say that they are afraid to bring detainees into the United States to face trial to come to New York and see how we handle them."

Nadler said the families of the victims of the September 11 attacks deserve the opportunity "to see these trials and confront these defendants in open court."

Independent New York City Mayor Michael Bloomberg said he supported Holder's decision to hold a trial in the city that bore the brunt of the September 11 attacks.

"It is fitting that 9/11 suspects face justice near the World Trade Center site where so many New Yorkers were murdered," he asserted in a statement. Bloomberg said he told Holder that "New York City stands ready to assist the federal court in the administration of justice in any way necessary."

But Rep. Pete King, a New York Republican who represents who parts of Long Island, said holding terrorism trials in New York City could be a security threat.

"We are already the top target of the world. ... They only have to be lucky once," said King, whose father was a New York City policeman.

Holding the trial in New York would put too much strain on the police force, he said. "They can do as good a job as possible but there are already a thousand cops working on counterterrorism, and to add to that will be very difficult," King said. He added that the trial could last for years.

King, the former chairman of the House Homeland Security Committee, said it is "morally and constitutionally" wrong to try terrorism suspects in civilian courts.

King also blasted the president for allowing Holder to make an announcement about a politically dicey national security issue, and for releasing it on a Friday as Obama was "sneaking away to Asia as this is happening."

Arizona GOP Sen. John McCain, however, contended that the decision to hold a civilian trial for some suspected terrorists and a military trial for others sent "a mixed message about America's resolve in the fight against terrorism."