Clinton: 'We're not interested in staying in Afghanistan' long-term 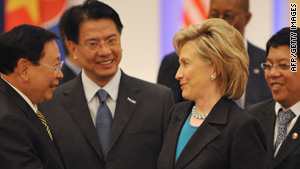 (CNN) -- Secretary of State Hillary Clinton said Sunday the primary U.S. mission in Afghanistan is defeating al Qaeda, rather than making a long-term commitment to rebuild the country.

"We want to get al Qaeda, we want to disrupt, dismantle and defeat those who attacked us, and we want to be able to give the Afghans the tools that they need to be able to defend themselves," Clinton said.

On the ABC show "This Week," Clinton said she has "made it clear" the United States won't provide civilian aid to Afghan government agencies without an effective certification process that shows the money will be spent on its intended purposes.

"We believe that President [Hamid] Karzai and his government can do better," Clinton said, adding that President Obama's government was "looking for tangible evidence" that the Karzai administration would be more responsive to the needs of the Afghan people.

She cited the need for the Karzai government to crack down on fraud and "demonstrate there's not impunity for those who are corrupt."

Obama is focusing on U.S. security in deciding whether to send up to 40,000 more troops to Afghanistan, as requested by his commanding general on the ground, Clinton said.

We've made it very clear. We want to get the people who attacked us.
--U.S. Secretary of State Hillary Clinton
RELATED TOPICS

"This is not the prior days when people would come on your show and talk about how we were going to help the Afghans build a modern democracy and build a more functioning state and do all of these wonderful things," Clinton said. "That could happen, but our primary focus is on the security of the United States of America, how do we protect and defend against future attacks. We do not want to see Afghanistan return to being a safe haven and a staging platform for terrorism as it was before."

In a dig at the previous Republican administration, she added: "We came to do a mission. Unfortunately, it was not achieved in the last eight years."

"We've made it very clear," Clinton said. "We want to get the people who attacked us."