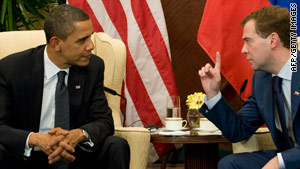 President Obama and Russian President Dmitry Medvedev have agreed on an ultimate goal of a nuclear-free world.
STORY HIGHLIGHTS

Singapore (CNN) -- Russia and the United States are well on their way to reducing their nuclear stockpiles, President Obama and Russian President Dmitry Medvedev said Sunday.

Ideological barriers no longer stand between the two countries, said Medvedev, who met with Obama after the Asia-Pacific Economic Cooperation summit wrapped up Sunday in Singapore. They both attended the forum.

Russia and the United States hope to finalize a treaty to reduce nuclear arms by year's end, according to both presidents.

"The world is watching," Medvedev said.

The two sides are working on renegotiating a follow-up to the Strategic Arms Reduction Treaty, which expires December 5.

Both men have agreed on an ultimate goal of a nuclear-free world. No one realistically thinks this will happen anytime soon, but reducing the number of nuclear warheads from the levels allowed in the original START agreement is a step in that direction.

Talks between the two leaders in Singapore focused on the future of the START treaty, Iran and Afghanistan, though they covered a number of topics, they said.

The leaders talked about what needs to be done to get Afghanistan long-needed peace, Medvedev said.

Iran has defied a U.N. Security Council demand that it halt its uranium enrichment program, insisting it has a right to produce fuel for civilian power plants.

The United States and other leading nations have been negotiating with Iran to send low-enriched uranium abroad to be turned into material for use in medical research and treatment at a reactor in Tehran.

The deal could reduce the amount of material Iran has to make a nuclear bomb. The United States and its allies fear Tehran's goal is to make a bomb. Iran denies it.

"We're now running out of time," Obama said of Iran, adding that the United States and Russia will continue to nudge Tehran toward the "right" path. Leading nations are prepared to work further, but other options remain on the table if such efforts fail, Obama said, without offering details.

Medvedev also spoke of being dissatisfied with the pace of negotiations with Iran and cooperating with the United States.

The Obama administration has worked to foster such cooperation. Ties between Russia and the United States chilled during the administrations of George W. Bush and Vladimir Putin.

"We want to reset our relationship, and so we will do it together," Secretary of State Hillary Clinton said during a meeting with Russian Foreign Minister Sergei Lavrov in March in Geneva, Switzerland.

Discussions with Medvedev in Singapore were thoughtful, said Obama, who added that he thought that "the reset button has worked."