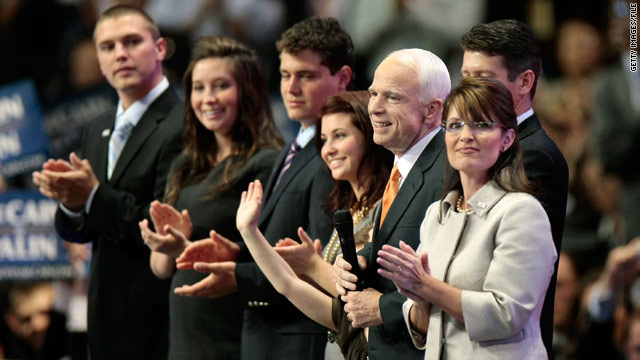 Washington (CNN) -- When Sarah Palin got a surprise phone call from the McCain campaign one August afternoon, asking whether she'd like to be on the Republican presidential ticket, the then-Alaska governor didn't doubt for a moment she was ready for the challenge.

"When I got the call, it was not such a shocking call to me," Palin told talk-show host Oprah Winfrey in a highly anticipated interview that aired Monday. "I felt quite confident in my abilities and my executive experience and I knew that this is an executive administrative job. I was happy to get in there and contribute."

Nor was Palin deterred by the fact she had five kids at home, including an infant with special needs.

"It never occurred to me that I couldn't do the job because of children," she said. "My children are my strength. ... They allow me to be grounded."

But what did shock Palin was just how much the campaign knew about her and her family before she even formally met with Sen. John McCain to discuss the job. Contrary to what was reported in the media, Palin said, she was extensively vetted, and the campaign knew exactly "who they were getting."

"After this vetting and the hours of discussion about the background, my record, my family, what I stand for ... I thought after all that I better confess it now, the one skeleton is in my closet," Palin said. "I did get a D 22 years ago in a college course. And I thought that was going to be the extent of the controversy in Sarah Palin's life."

One year later, Palin has seen more than her fair share of controversies but has emerged as one of the hottest Republican stars and is among the early leaders for the 2012 presidential nomination.

Her session with Oprah came a day before her already-bestseller "Going Rogue: An American Life" will hit bookstores and Palin will hit the road on a tour of some of America's most conservative corners.

The book and concurrent publicity blitz have all the trappings of an early salvo in the upcoming race for the White House, but Palin said 2012 isn't on her radar screen.

"I am dealing with so many issues that are important ... and what I am finding, clearer and clearer every day, what I am seeing is that you don't need a title to make a difference."

In the wide-ranging interview, few subject were left untouched, including Palin's early and frequent clashes with the senior ranks of the McCain campaign.

In what was her initial introduction to the high stakes of presidential campaigning, Palin was blindsided by the fact that McCain aides knew that her then-17-year-old daughter Bristol was pregnant, a fact that Palin had yet to disclose back in Alaska.

"I was surprised that they knew. I was surprised, too, that we didn't handle that issue, that challenge better," she said. "If we were given the allowance to deal with the issue in a more productive way, we could have perhaps sent a better message: This is not to be emulated."

For the newly minted vice presidential candidate, that was the first sign that she was in for a rocky road with McCain's campaign advisers.

"I rewrote it, and couple hours later it scrolled across the screen. ... There it is, the message I didn't want sent. Just a little indication about problems to come about what I would be able to say and how I would be able to speak, or not speak, my heart and my values."

The handling of her daughter's pregnancy was only the first of a string of frustrations for Palin over the course of the campaign, during which, she said, she and her family felt like they couldn't be themselves.

Palin said nowhere was this made more clear than when McCain advisers forced the family to completely overhaul their wardrobe when they touched down in Minneapolis, Minnesota, for the Republican National convention in early September 2008.

"I though this was like one of those relationships you have, when you're young, and somebody says, 'I just love you the way that you are; now let me change you,' " she said.

Another frustration was the campaign's insistence that she grant repeated interviews to CBS anchor Katie Couric, after it was exceedingly clear that they were not going well.

"After the first segment, which didn't go well, I didn't do very well -- I was annoyed with her badgering of questions -- I was scheduled to do a second, then a third and then a fourth. ... I know that there were hours of tape that were shot, and I would think that those few minutes that were edited together ... and shown to the American public, if people only know me from that interview, [they would think] that I was not qualified," she said.

But the ultimate showdown with McCain aides came on election night, Palin said, when she was prevented from delivering a concession speech before McCain took the stage.

"I was disappointed that the explanation I was given that ... VP candidates never give a speech on election night. That was false because I have seen it happen. In fact four years prior, of course, that had happened."

Ultimately, however, Palin said she thinks that even if she had been allowed to be more herself on the campaign trail, it is likely the GOP presidential ticket would have lost.

"The reason that we lost: The economy changed under a Republican administration," Palin said. "People were sincerely looking for change. They were quite concerned about the road that America was on with its economy. They did not want more of the same. They did not want status quo. And I think, unfortunately, our ticket represented what was perceived as status quo."

But since the campaign came to end one year ago -- and with it McCain advisers' influence over Palin -- she has become more controversial, especially after she abruptly resigned as Alaska's governor over the summer.

"I resigned as governor of Alaska because I wasn't going to run for a second term, and I was heading into a lame duck term," Palin said of that decision, which shocked political observers.

"We came back [from the campaign] to a new normal in Alaska. Everything had so changed in my administration," Palin continued. "There were so many opposition researchers up there in Alaska that were sent, probably, by the Obama camp. ... It was a point where my state of Alaska was being hampered by my presence there."

Ultimately though, Palin made clear the move wasn't so much an end as it was a beginning.