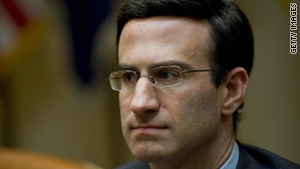 Peter Orszag says the detection of improper payments were made through stricter and expanded accounting methods.
STORY HIGHLIGHTS
RELATED TOPICS

Washington (CNN) -- The federal government made $98 billion in improper payments in fiscal 2009, and President Obama will issue an executive order in coming days to combat the problem, his budget director announced Tuesday.

The 2009 total for improper payments -- from outright fraud to misdirected reimbursements due to factors such as an illegible doctor's signature -- was a 37.5 percent increase over the $72 billion in 2008, according to figures provided by Peter Orszag, director of the White House Office of Management and Budget.

In an evening media briefing, Orszag was unable to provide an overall figure for what percentage of the bad payments was due to fraud. He also lacked a breakdown on how much of the total improper payments involved spending on Obama's $787 billion economic recovery package passed in February.

Orszag said the executive order coming in the next week will promote transparency, strengthen accountability and provide incentives to improve the government payment process, Orszag said.

"Our goal is to make sure the right person or entity gets the right amount at the right time," he said.

The increase in the total over the previous year was due in part to improved detection through stricter and expanded accounting methods, Orszag said.

This year, Orszag said, an improper doctor's signature was "much more likely" to trigger an improper payment than in 2008.

Overall, improper payments for the Medicare fee-for-service program and the Medicare Advantage accounted for $36 billion, or more than a third of the 2009 total.

Obama and Democratic leaders say that wiping out waste and fraud in Medicare, including the elimination of more than $100 billion in government subsidies for the Medicare Advantage program in which private insurers supplement standard Medicare coverage, will reduce government health care costs by several hundred billion dollars.

Obama's executive order will include setting up Web site dashboards for each agency to provide the public with "easy-to-follow" information on improper payments, including tracking error rates and identifying responsible officials, Orszag said.

Incentives in the executive order will reward states, local communities and other organizations for reducing improper payments and increase penalties for contractors that fail to report problems such as receiving double payments for work done or getting paid despite doing no work, Orszag said.

He cited progress already in new efforts to reduce bad payments, including pilot programs in three states that have recovered $9 million in improper Medicare payments. The recovery audit program will be expanded to all 50 states, Orszag said. In addition, Orszag noted the administration requested $1.9 billion in federal funds to bolster accounting and monitoring of government spending.

Sen. Tom Carper, D-Delaware, said in a statement Tuesday night that the news "shows that we have a lot to do here in the federal government when it comes professionalizing financial management and rooting out waste."

"It goes without saying that these results would be completely unacceptable in the private sector, as they should be in government, especially at a time of record deficits," Carper continued. "That said, there is a silver lining. More agencies are becoming better at estimating and identifying costly mistakes."

Some of the larger figures for improper payments were:

• $12 billion for Medicaid Advantage, out of a total of $77 billion

• $12 billion for unemployment insurance, out of a total of $119 billion

• $12 billion for the Earned Income Tax Credit, out of a total of $48 billion