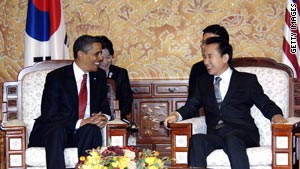 Obama announced that he will send American envoy Stephen Bosworth to North Korea on December 8 for bilateral talks on dismantling Pyongyang's nuclear program.

"If North Korea is prepared to take concrete and irreversible steps to fulfill its obligations and eliminate its nuclear weapons program, the United States will support economic assistance and help promote its full integration into the community of nations," Obama said. "That opportunity and respect will not come with threats. North Korea must live up to its obligations."

Obama also said the United States and its allies were working on steps to take against Iran after its apparent rejection of a nuclear deal.

"We have begun discussions with international partners about the importance of having consequences," Obama said. "Our expectation is that, over the next several weeks, we will be developing a package of potential steps we could take that will indicate our seriousness to Iran. I continue to hold out the prospect that they may decide to walk through this door. I hope they do."

Video: Obama meets with half brother

Iranian Foreign Minister Manouchehr Mottaki said his country will not send its partly enriched uranium abroad to be turned into material for medical research, but added that Tehran might allow its nuclear material to be reprocessed inside Iran, the semiofficial ISNA news agency reported.

The deal hammered out in November with the help of the U.N. watchdog agency aimed to reduce the amount of raw material Iran has to build a nuclear bomb.

Tehran denies that it wants to do so, saying its nuclear program is to produce civilian nuclear energy and do medical work.

During their news conference, Obama and Lee also expressed support for a stalled U.S.-South Korea free trade agreement. The deal was signed in 2007, but has yet to be ratified by the legislatures of either country.

South Korea was the final stop on Obama's four-nation tour of Asia.

Obama began his trip in Japan before traveling to Singapore, where he attended the Asia-Pacific Economic Cooperation summit and the Association of Southeast Asian Nations economic forum, meeting on the sidelines with world leaders including Russian President Dmitry Medvedev.

Obama then traveled to China, where he met with leaders including President Hu Jintao. After their talks, the two spoke of a common vision of shared responsibilities and economic opportunities.

Trade, nuclear proliferation, climate change and the sticky issue of human rights were part of their discussions.

Obama, whose flight will stop for refueling in Alaska, is due back in the United States on Thursday.