What to expect in Senate's Saturday health care vote 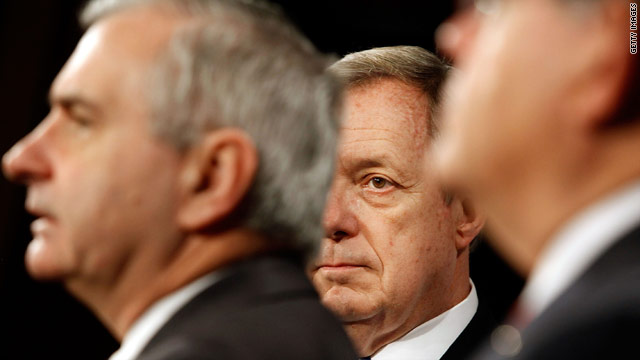 Washington (CNN) -- To debate or not to debate the Senate's health care reform bill; that is the question.

The legislative body on Saturday is expected to vote on whether to begin debate -- also known as invoking cloture -- on its version of the health care bill, which was introduced Wednesday by Senate Majority Leader Harry Reid.

Reid says the 2,074-page bill would expand health insurance coverage to 30 million more Americans at an estimated cost of $849 billion over 10 years. A House bill was passed nearly two weeks ago.

Proceedings begin at 10 a.m. and will last through the early evening.

Around 8 p.m., the Senate will hold a roll call vote on the motion to invoke cloture.

Reid needs 60 votes in the 100-member Senate to overcome a certain GOP filibuster attempt and open the chamber's debate on the bill. It would take another 60 votes to close debate that could last for weeks, while final approval of the bill would require only a simple majority.

So how will the Democratic leadership get the magic number 60?

Sen. Dick Durbin, the number two Democrat in the Senate, said it's about "working hard to bring all Democrats together for the 60 votes necessary to proceed to this historic debate."

Durbin said it would be a "real break" if even one Republican got on board with Democrats.

"But if they don't, I'm hoping that we can muster our ranks to stand together," he added.

But Democratic leaders have some moderates to contend with: Ben Nelson of Nebraska, Blanche Lincoln of Arkansas and Mary Landrieu of Louisiana.

Earlier Wednesday, Reid met with the three moderates, who have expressed concerns about the cost and scope of health care reform proposals outlined in a bill that came out Wednesday.

• Prohibits illegal immigrants from participating in a health insurance exchange created for those unable to afford health coverage.

• Prohibits the use of federal funds for abortion coverage in the exchange.

• Requires individuals to buy health insurance, with a fine for noncompliance.

• Does not mandate that all employers offer health care.

Landrieu says she's concerned about the bill's costs to small businesses and individuals, and says she's opposed to a public health insurance option "that will undermine the private insurance market."

On Friday, though, Nelson came out in favor of opening debate.

"Throughout my Senate career, I have consistently rejected efforts to obstruct," he said in a statement. "That's what the vote on the motion to proceed is all about. It is not for or against the new Senate health care bill released Wednesday. It is only to begin debate and an opportunity to make improvements. If you don't like a bill, why block your own opportunity to amend it?"

The Nebraska Democrat sounded a positive note Thursday after emerging from a meeting with Reid, although he told CNN then that he was withholding his final decision on the motion to proceed until he had a chance to "study [the bill] or at least review it to begin with."

He said that there had been concerns about the length of time the bill would be made public before the final vote, and whether it would be read on the floor -- but that it appeared that Reid had largely satisfied his concerns about those issues.

Nelson also said the meeting did not include discussion of the specifics regarding abortion language, the antitrust exemption for the insurance industry and other issues of concern to him.

While Nelson has come on board, the hard part for the leadership now will be swaying Landrieu and Lincoln.

The two will play a pivotal role in the success or failure of health care reform in the Senate. If Republicans stay unified in opposition to the health care bill, Reid would need the support of all 58 Senate Democrats as well as independent Sens. Bernie Sanders of Vermont and Joe Lieberman of Connecticut to overcome a filibuster.

If Democrats do get the 60 votes needed to proceed, the legislative game only just begins. Expect several weeks of amendments being introduced, impassioned debates on the Senate floor and news conferences for and against the proceedings.

If the Senate manages to pass a bill, a congressional conference committee would need to merge the House and Senate proposals into a consensus version requiring final approval from each chamber before moving to President Obama's desk to be signed into law.