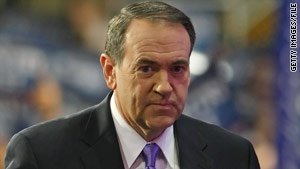 Mike Huckabee says reports that he had pardoned Maurice Clemmons or set him free were erroneous.
STORY HIGHLIGHTS

Maurice Clemmons, 37, was shot and killed early Tuesday by Seattle police. He was the subject of a two-day manhunt after the four officers were killed at a coffee shop as they met before their shifts began Sunday morning.

Clemmons had a criminal history in Arkansas and Washington. In May 2000, Huckabee commuted his 108-year prison sentence to make him immediately eligible for parole, which was granted by the parole board two months later. Clemmons had been sentenced to 95 years, to run after time he was already serving on previous convictions.

In a statement on the conservative news Web site Newsmax.com, Huckabee wrote that he commuted Clemmons' sentence from 108 years to 47 years. Reports that he had pardoned Clemmons or set him free were erroneous, he said.

Video: 'Should have been locked up'

But the Arkansas prosecutor who put Clemmons behind bars told CNN on Tuesday that Huckabee was issuing clemency at "an astounding rate" during his tenure as governor.

"He was exercising the clemency power at what I call a wholesale rate," Larry Jegley said. "He was letting murderers out, he was letting rapists out, and he was letting the likes of Mr. Clemmons out."

One survey, he said, showed Huckabee issued more clemencies from 1996 to 2004 than the governors of all six surrounding states, including Texas.

He said he didn't know why so many clemencies were granted. "That was part of the frustration that we felt with the entire process. ... We never felt as though he gave victims, their families, jurors, law enforcement and the community in general an adequate explanation as to why he felt compelled to let people of proven danger go in our community."

Huckabee was a Republican presidential candidate in the 2008 election and has not ruled out another White House bid in 2012. During his 2008 campaign, he was criticized for granting clemency to another inmate, convicted rapist Wayne DuMond, who was later convicted of raping and murdering a woman in Missouri.

"Between 1,000 and 2,000 requests for some form of clemency came to my desk each and every one of the 10½ years I was governor," Huckabee said Tuesday. "Ninety-two percent of the time, I denied the requests."

He noted that in Arkansas, a governor does not initiate a sentence change -- the Post Prison Transfer Board makes a recommendation to the governor after reviewing an inmate's file. The governor then can grant or deny it.

Clemmons was 16 when he was charged with robbery and burglary. "For the crimes he committed and the age at which he committed the crimes, [a 108-year sentence] was dramatically outside the norm for sentencing," Huckabee said. The board unanimously recommended that the sentence be commuted.

Jegley said that while in prison in Arkansas, Clemmons had a disciplinary record for violent incidents, and that something should have tipped off the board or the governor that "this man was not a good candidate to be put back in society, because he couldn't live in the cloistered environment of prison and stay out of trouble."

Watch what Jegley has to say

In the case of any form of clemency -- a commutation or a full pardon -- notice is given to the prosecutor, the judge, law enforcement officials, the attorney general and the secretary of state, as well as the media, for a public response period, Huckabee said. "The only record of public response to the notice to commute was from the trial judge, who recommended the commendation in concert with the board."

Jegley told CNN he was not notified of the commutation, but he doesn't "attribute that to something sinister. ... I just think that maybe the system fouled up and didn't get notification out to all the parties who were interested in it, my office included."

Clemmons was returned to prison after violating his parole, Huckabee said. He "should have stayed there. For reasons only the prosecutor can explain, charges were not brought forth in a timely way and the prosecutor ended up dropping the charges, allowing him to leave prison and return to supervised parole."

He noted that Clemmons, who had been picked up again in Pierce County, Washington, was released on bail there only days before the officers were slain.

"I can't explain why he wasn't prosecuted properly for the parole violations or why he was allowed to make bail in Washington state and not incarcerated earlier for crimes committed there," the former governor wrote.

On Sunday, Huckabee's office issued a statement saying that if Clemmons was "found responsible for this horrible tragedy, it will be the result of a series of failures in the criminal justice system in both Arkansas and Washington state."

Police responded sharply to that statement. "We're disappointed that Governor Huckabee came out in the middle of the night without calling anybody here and blamed this on the criminal justice system in the state of Washington," Pierce County Sheriff's Department spokesman Ed Troyer said. "We're guessing that's probably a spin doctor, not him."

Huckabee wrote of Clemmons, "I wish his file had never crossed my desk, but it did. The decision I made is one that I now wish were different, but I could only look backwards at his case, not forward. None of this is of any comfort to the families of these police officers, nor should it be. Their loss is senseless. ... Our system is not perfect, and neither are those responsible for administering it.

"The system, and those of us who are supposed to make sure it works, sometimes fail," Huckabee said. "In this case, we clearly did."