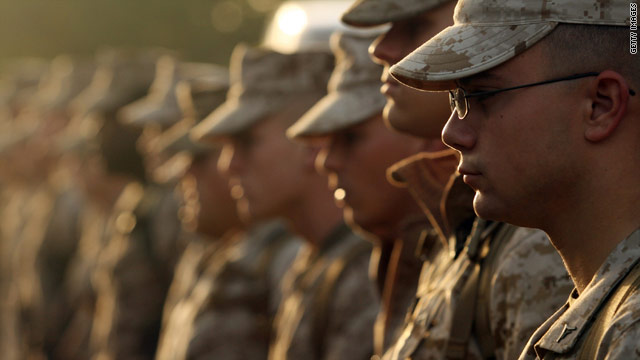 (CNN) -- Thirty thousand more troops by the summer. It's a daunting challenge laid out by President Obama, and it's now having the U.S. military scrambling to get it done.

"The president decided to narrow the mission in terms of time and focus," he added.

But before Obama's address, military leaders said it would be all but impossible to rush new troops to Afghanistan as quickly as they did Iraq.

"It's not going to be a brigade a month, because of the infrastructure piece," said Adm. Mike Mullen, chairman of the Joint Chiefs of Staff, in mid-November.

Officials admit there hasn't been enough manpower to remove the Taliban from parts of Helmand Province in the south, and areas to the east.

Video: The case for Afghanistan

Gen. Stanley McChrystal, the top commander in Afghanistan, said Wednesday that the focus will be on sending troops to the south.

"The south is going to be our main effort. I believe that by next summer, the uplift of new forces will make a difference on the ground significantly," he told troops in Kandahar.

The first to go will be 1,000 Marines from Camp Lejeune, North Carolina, and they'll start deploying at the end of December, according to military officials.

But a lot of it is going to be dictated by conditions on the ground: Can they build the new bases, the new roads, new infrastructure to handle this influx of troops?

Mullen told a Senate hearing on Wednesday that getting troops and equipment into Afghanistan is harder than Iraq.

Five brigades rushed into Iraq in just five months. They did so over paved highways and had a huge staging area in the Kuwaiti desert, something that is not the case in Afghanistan.

But Mullen said the first troops have already been given orders.

"The first troops will be there in a couple weeks and are already under orders since the president made his announcement last night," Mullen said. "A significant number of them [are] to arrive in the spring -- March-April timeframe -- and roughly 20 to 25 thousand by the July time frame. And that is getting them in, getting them prepared and obviously getting them on mission."

There will be many obstacles.

A lack of paved roads outside the largest cities are easy places for the Taliban to place roadside bombs, known as IEDs, or improvised explosive devices.

In addition, the main way to move troops and supplies around the country is by helicopter. The country is landlocked, and no navigable waterways lead to the ocean. Supplies must be flown in or shipped to Pakistan and driven to Afghanistan.

The weather also poses a problem for the troops. Temperatures can dip to -10 degrees Fahrenheit in winter and soar above 110 degrees in summer.

Forces already in Afghanistan have learned a lot and offer a candid assessment of the challenges ahead from Obama's second surge. Earlier in the year, he ordered more than 20,000 troops to Afghanistan.

Soldiers who were part of that earlier increase said supplies took months to catch up with them.

"Logistically, we weren't prepared for this surge," Army Spc. Luke Adler said. "But [the] problem is, it's getting there a little bit after the troop surge when it should have been vice versa, should have been support first or at the same time at least."

And then there's the issue of where to house the new troops.

Most of the new forces will head south to places such as Camp Wolverine in southern Afghanistan, where construction is already under way to increase its capacity from 1,800 to 5,000 troops.

"We're nowhere near there, and we're doing a lot of it ourselves ... just to get ready to bring in the mass of troops," said Navy Lt. John Critch.

Defense analysts have said that because housing is so tight at many bases, most of the new troops will have to live in an "expeditionary state."

"That is to say, tents and so forth as opposed to hard, standing buildings," said Frederick Kagan of the nonpartisan American Enterprise Institute.

Air Force Sgt. Nicholas Caldwell is building a new road at Camp Wolverine. He said the Navy and Air Force engineers are working overtime to expand the base.

"We [are] working hard and doing as much as we can. It would be nice if we could get some help."

It's a sentiment echoed by Army MSgt. Tracey Marshall, who added that "we're taking a lot of hits, and we need more people."

Another problem: the large workload for understaffed subcontractors.

Critch said one Afghan contractor showed up with a few men and some wheelbarrows and only managed to lay a tenth of the agreed-upon concrete.

Even that, he said, needed to be torn up because the quality was poor.

CNN's Mike Mount and Larry Shaughnessy contributed to this report.