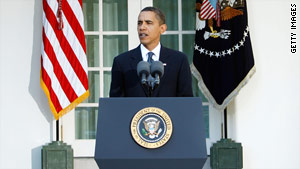 (CNN) -- President Obama -- fighting wars in two countries -- will arrive in Norway on Thursday to accept the Nobel Peace Prize for 2009.

The president will spend 26 hours in Oslo meeting the royal family, accepting the Nobel at an afternoon ceremony and attending an award banquet that evening.

At the ceremony, Obama will accept a $1.4 million prize check, a gold medal and a diploma.

He also will speak at the ceremony, which will be streamed live on CNN.com starting at 7 a.m. ET. He will touch on the war in Afghanistan, for which he last week announced a surge of 30,000 U.S. troops, said White House press secretary Robert Gibbs.

Obama's day will begin with a trip to the Nobel Institute, where he will meet for the first time the five-member panel that unanimously picked him for the prize, said Mette Owre of the Norwegian Foreign Affairs Ministry.

The president and first lady Michelle Obama will then meet with Norway's King Harald V and Queen Sonja before heading to the award ceremony.

"Then he goes to the hotel where he is staying. He will have some downtime. He is governing America at the time," Owre said.

In the evening, the president will be the guest of honor at a banquet where the king and queen and the Norwegian prime minister will be among 250 attendees, Owre said.

Obama's Nobel Prize win, announced in October, elicited swift reaction -- some hailing the choice; others asking what he had accomplished to deserve it.

Nominations for the prize had to be postmarked by February 1, only 12 days after Obama took office. The committee sent out its solicitation for nominations last September, two months before Obama was elected president.

Only very rarely has a person to the same extent as Obama captured the world's attention and given its people hope for a better future.
--Nobel committee
RELATED TOPICS

The Nobel committee said it recognized his efforts at dialogue to solve complex global problems, including working toward a world free of nuclear weapons.

"Only very rarely has a person to the same extent as Obama captured the world's attention and given its people hope for a better future," the committee said.

The president said he saw the decision less as a recognition of his accomplishments and more as "a call to action."

Some analysts have speculated that the prize could give Obama additional clout as he forms a new strategy for the war in Afghanistan and attempts to engage Iran and North Korea.

The domestic political consequences are unclear. Obama's supporters hope the prestige associated with the prize will strengthen the president's hand in the health care reform debate.

The ceremony honoring the winners in the other Nobel Prize categories also will be held Thursday, but in Stockholm, Sweden. Those winners were picked by a committee separate from the one that determines the Peace Prize winner.

December 10 is the anniversary of the death of Alfred Nobel, the inventor of dynamite and founder of the prizes.