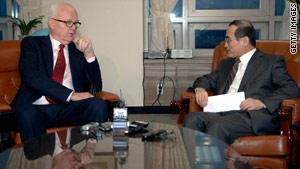 In Washington, Clinton said she agreed with special envoy Stephen Bosworth that the talks were "very useful," adding, "It does remain to be seen whether and when the North Koreans will return to the six-party talks, but the bottom line is that these were exploratory talks, not negotiations."

North Korea has refused to return to the talks conducted by the United States, Russia, China, South Korea and Japan, insisting that it wants to talk directly with the U.S.

Of his three-day visit, Bosworth said, "My purpose ... was to facilitate the resumption of the six-party talks and to reaffirm the goal of fully implementing the September 2005 joint statement."

Holding a news conference Thursday in Seoul after his visit to North Korea, Bosworth said, "I communicated President Obama's view that complete denuclearization of the Korean Peninsula is a fundamental undertaking of the six-party process ... and that the absence of progress on denuclearization is an obstacle to improving our relations."

As Obama "has made it clear, the United States is prepared to work with allies, partners in the region to offer ... North Korea a different future," he said.

Bosworth said he held talks with North Korean officials, but not President Kim Jong Il, because "we did not ask" for a meeting with the leader. He said they did not make plans for a future meeting.

Many observers are wondering what's behind the North's latest moves, and some said Bosworth's trip is a positive.

"The visit gives North Korea a lot of 'face,' a sense of importance," said Wenran Jiang, political science professor at the University of Alberta in Canada.

Some analysts said North Korea might be trying to buy time.

Earlier reports in Seoul claimed that North Korea is in the final stages of restoring its Yongbyon nuclear plant, which Pyongyang had begun to disable before walking away from the six-party talks. Given the secrecy of the North, those reports could not be verified.

A joint statement issued by the six-party nations in September 2005 said North Korea had "committed to abandoning all nuclear weapons and existing nuclear programs."