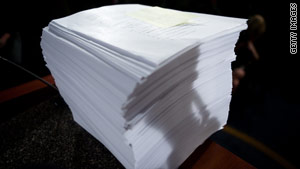 "The provisions in the bill are a big improvement over the current system," a Democratic Senate aide says.
STORY HIGHLIGHTS
RELATED TOPICS

Washington (CNN) -- After hearing concerns from patient advocates, the White House on Friday said it is looking to close a loophole in the Senate health care bill that would allow caps on annual insurance benefits.

"The president has made it clear that health insurance reform legislation should prevent insurance companies from placing annual limits on health expenditures that can force families into financial ruin," said White House spokesman Reid Cherlin. "We will continue to work with Congress on this policy."

The loophole in the Senate bill reversed a previous version of the plan that would have prevented insurance companies from establishing such limits, according to three Democratic aides who spoke to CNN earlier Friday.

However, in a statement Friday night, the group said, "People with cancer are very encouraged that their concerns have been heard about a provision currently in the Senate health care reform bill that could subject patients to a sudden termination of coverage for critical care.

"After discussions with senior White House and congressional staff this afternoon, we are confident that our concerns will be resolved and the bill strengthened."

In acknowledging the loophole Friday, a spokesman for Senate Majority Leader Harry Reid said, "We were trying to minimize premium impacts."

When asked if the language goes against one of the fundamental promises Democrats made in health care reform, Sen. Tom Harkin, chairman of the Senate Health, Education, Labor and Pensions Committee, said it was "one of the compromises we had to make."

"We do have no lifetime caps, and we put in there no unreasonable annual caps," he said.

After the loophole was reported on CNN Friday, the White House and key congressional staffers spoke to the Cancer Action Network and agreed to help close the loophole.

Still, Democrats said they had to make that compromise because telling insurance companies to get rid of annual caps on the amount of coverage would significantly raise the price of premiums for all Americans.

No one is saying who put the loophole in the bill. The provision was added behind closed doors in Reid's office when he and a small group of Democrats -- along with White House officials -- merged two Senate committee bills into the one that's now on the floor.

"The provisions in the bill are a big improvement over the current system in which cancer patients have to fight for coverage and often don't get the preventive services that catch cancers at an early stage. We hope to make the provisions even stronger in the bill Congress sends to the president," a Democratic Senate aide, who declined to be identified, said about the change.

Aides said senators will continue to review the policy closely as the process moves forward.

"Ensuring affordable health care costs requires a balance between too much insurance market regulation and not enough," said Erin Shields, an aide to Senate Finance Chairman Max Baucus, D-Montana. "That balance is what this bill aims to achieve, especially with regard to annual limits. Senators want to ensure this provision provides as much consumer protection as possible while keeping premiums affordable."