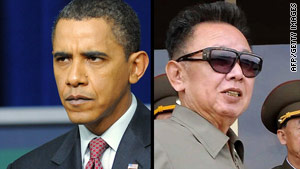 The official declined to be identified because of the sensitivity of the issue.

Bosworth noted last week that, during his visit, he "communicated President Obama's view that complete denuclearization of the Korean Peninsula is a fundamental undertaking of the six-party process ... and that the absence of progress on denuclearization is an obstacle to improving our relations."

As Obama "has made it clear, the United States is prepared to work with allies [and] partners in the region to offer ... North Korea a different future," he said.

Bosworth also said he wanted to reaffirm the goal of "fully implementing" a September 2005 joint statement issued by the nations in the six-party talks, declaring that North Korea had "committed to abandoning all nuclear weapons and existing nuclear programs."

North Korea, however, has refused to return to the talks conducted by the United States, Russia, China, South Korea and Japan, insisting that it wants to talk directly with the U.S. government.

Bosworth's visit did not result in any promise from the North Korean government to return to the six-party negotiations aimed at ending its nuclear program. Secretary of State Hillary Clinton, however, last week called the meeting "quite positive."

"It does remain to be seen whether and when the North Koreans will return to the six-party talks, but the bottom line is that these were exploratory talks, not negotiations," she said.