Military: Burn pits could cause long-term damage to troops 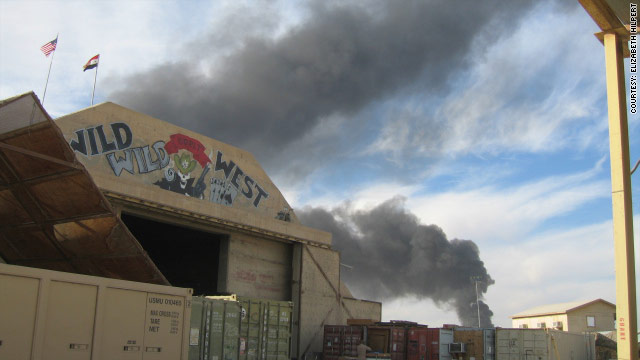 Smoke billows from a burn pit on a base in Al Taqaddum, Iraq, in 2007.
STORY HIGHLIGHTS

Washington (CNN) -- The military is backing off its previous position and acknowledging that some troops exposed to the burning of refuse on military bases could be susceptible to long-term health effects.

Since the issue first arose two years ago, Pentagon health officials have insisted that, based on its analysis, troops who were near burn pits at Joint Base Balad in Iraq -- the largest base in that country -- faced no long-term health hazards. That covered most of the troops who passed through the base.

The Department of Defense found that the burn pits, which are used instead of incinerators on some bases and outposts in Iraq and Afghanistan, could cause effects in the short term -- including irritated eyes and upper respiratory system problems -- that can lead to persistent coughing. But the department said "it is less clear what other longer-term health effects [there] may be."

But one of the top military health officials, Dr. Craig Postlewaite, signaled in a recent interview with the Salt Lake Tribune that certain troops, who have other medical conditions, may be at risk for long-term effects.

"Over time, we have come to recognize that certain individuals may be more susceptible to the effects of burn-pit smoke than others because of genetics and pre-existing health conditions and that some of these personnel may be at risk of more serious health effects following prolonged smoke exposure, and possibility to other inhalational exposures, such as tobacco smoke and possibly high levels of air borne particulate matter," Postlewaite said this week in a statement provided to CNN.

The military now suspects that exposure to burn-pit smoke combined with other factors -- such as smoking, proximity to the pit, certain genetic factors or pre-existing conditions -- could lead to longer-term effects.

After an outcry from veterans concerned that burn-pit exposure was not being acknowledged by the Department of Defense and Veterans Affairs, both agencies have begun a larger study of troops to determine what other health effects there could be.

A senior master sergeant with the Air Force, who did not want his name used because he is still in service, said that he now has a growth on his lungs and that his doctors think the burn pits were a contributing cause.

He deployed to Iraq in October 2004 and worked there for six months as a contract supervisor for the Army. His daily routine included driving past the burn pits at Balad as he ferried Iraqi contractors around the massive base.

As he drove by, the master sergeant could see the refuse being burned, from trash to concrete to sides of tin buildings and sheet metal.

"You just held your breath, because if you breathed, it would burn," he told CNN in a phone interview.

He slept about a mile from the pit, but, depending on the winds, the burning could create a "fog" over his compound.

"You could tell when the trash was burning," he said. "You could smell if it was really heavy and feel it burning in your nostrils and lungs."

The master sergeant was in good health before he left for Iraq. Earlier in his military career, he had worked with hazardous materials, but a predeployment scan in 2004 showed his lungs were in fine shape.

In 2006, after finding he would get easily winded and feel discomfort in his chest, the sergeant underwent testing, and a military doctor discovered a nodule on his lungs. A biopsy showed it was benign, but he needs to be tested every year. His doctors are concerned that his family history of cancer makes him more susceptible to further problems.

But his case illustrates just how difficult it is to link symptoms to cause.

As he said, he had worked with hazardous materials before he deployed. After Iraq, he was stationed in Naples, Italy, where the base also had trash disposal problems. Still, he knows that his lungs were clear before he was in Balad and that within a year of returning, he had the growth.

The Disabled American Veterans organization has been keeping a database of troops who report problems related to the pit. In one year, nearly 500 service members or their families have come forward, said the DAV's John Wilson.

That registry is "very narrow," Wilson said, because it relies on self-reporting. Rep. Tim Bishop, D-New York, has proposed legislation to have the Defense Department and Veterans Affairs create a registry of all service members exposed in Iraq and Afghanistan. Congress already passed legislation, which the president signed, to prohibit the use of burn pits for hazardous waste unless there is no alternative.

A study that compared Iraq veterans with those who served stateside found that those who were in Iraq were diagnosed with new-onset adult asthma at twice the rate of stateside troops.

The head of the allergy section of the Veterans Affairs Medical Center in North Port, New York, told Congress that since 2004, he has clearly seen an effect on previously healthy and athletic service members.

"Now these individuals suffer from a variety of respiratory illness, including asthma and difficulty breathing during exertion," Dr. Anthony Szema told a policy hearing in November.

That's what happened to Reservist Michelle Franco, who was a nurse at Balad from September 2006 through January 2007.

"When I came back, I couldn't climb stairs without problems breathing," she said. Tests by pulmonologists found asthma-like conditions, but her condition wasn't asthma. A private doctor and a military one told her it probably was caused by exposure to contaminants in Iraq.

Getting that diagnosis was a struggle for her. When she returned, burn pit exposure was not a recognized issue. She was told to lose weight, which she did, and it didn't help. She also exercised regularly and said she took all types of medicine, but medications didn't help, either.

As a nurse, Franco knew that she didn't just have asthma. But she said others may not realize they have greater problems.

"Because nobody knows, it seems to me the military member needs to be given the benefit of the doubt. I feel badly for the young men who don't understand this isn't asthma," Franco said.

Franco has had to prove to the military that her service caused her illness.

The military is trying to help that by better recording where people served, according to a Pentagon spokeswoman. Before 2006, at best, the records showed what country people served in. Now they can be tracked to the "ZIP code," the spokeswoman said.