Public option may be dropped from final health care bill 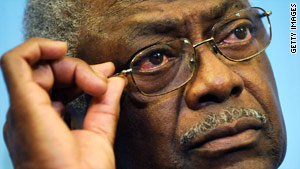 Rep. James Clyburn of South Carolina has said he could vote for a bill without the government insurance plan.
STORY HIGHLIGHTS
RELATED TOPICS

Washington (CNN) -- House Democrats are signaling that a final health care bill will drop the government-run public health insurance option favored by liberals but rejected by conservatives from both parties.

A House-Senate conference committee will begin negotiations next month on merging health care bills passed by the Democratic majorities in each chamber.

However, voting in both chambers was extremely close, raising concerns that a compromise might fail to win the necessary final approval.

One of the main differences between the two measures is the public option. The House bill contains the public option as a competitor to private insurers in a national heath insurance exchange open to people now unable to get coverage, but the Senate version lacks a public option.

President Obama, who has made health care reform his top domestic priority this year, has expressed general support for a public option but stops short of insisting on the provision.

Liberal Democrats in the House have said they want to keep the public option, but one of their leaders -- Rep. James Clyburn of South Carolina, the chamber's third-ranking Democrat -- said Sunday that he could vote for a bill without the government insurance plan.

"We want a public option to do basically three things: create more choice for insurers, create more competition for insurance companies and to contain costs," Clyburn said on the CBS program "Face the Nation." "So if we can come up with a process by which these three things can be done, then I'm all for it. Whether or not we label it a public option or not is of no consequence."

The Senate health care bill required the support of all 60 members of the Democratic caucus to overcome a Republican filibuster. Such precarious support allowed individual moderates in the Democratic caucus to wield major influence on the bill, with at least two -- Sens. Joe Lieberman of Connecticut and Ben Nelson of Nebraska -- saying they would oppose the measure if it contained the public option.

On Sunday, Rep. Chris Van Hollen of Maryland, chairman of the Democratic Congressional Campaign Committee, acknowledged the reality of the Senate politics. Asked on "Fox News Sunday" about the public option, Van Hollen said, "It's not dead, but we also recognize that the Senate was able to just muster the 60 votes."

The House could drop the public option if "there are other mechanisms in whatever bill comes out that will keep down premiums," Van Hollen said.

Supporters of a public option say it would provide nonprofit competition to private insurers that would bring down costs, but opponents contend that it is the first step toward a government takeover of the health care system.

In place of a public option, the Senate bill includes a provision allowing private insurers to offer nonprofit coverage overseen by a government agency.

Both the House and Senate bills would permit the creation of nonprofit private insurance cooperatives to increase competition.