(CNN) -- He performed to a watching audience of millions at the closing ceremony of the Beijing Olympic Games, but conducting the Hong Kong Philharmonic Orchestra has been the most nerve-wracking thing the American-Chinese pop star Wang Leehom has undertaken for some time. 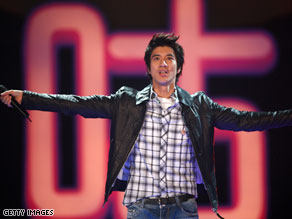 From the Olympics to holding the baton himself, Leehom has tackled a variety of projects.

"I think I always throw myself in these impossible situations and then see if I can scramble out of them and gain something from these experiences," he told CNN during rehearsals for the December performances.

"Standing in front of the orchestra was intimidating at times, but I think we got through it, and I think we made some exciting waves in town. We definitely got the crowd excited about it."

Leehom has certainly made waves with his Mandarin-language pop music, having sold around 15 million records, but as his recent foray in classical music confirms, he's more than just another voice with an interesting haircut.

Growing up in the U.S. to a family of doctors, he excelled at school but decided to take a different path to his parents.

After shunning the opportunity to study at an Ivy League university, he spent some time at Williams College of liberal arts before getting his big break in pop in Taiwan in 1995. At that time he admits he knew nothing about Chinese music and didn't speak Mandarin.

Learning Mandarin was just another challenge Leehom rose to meet and he believes that having Chinese as a second language has been to his advantage, and his interest in the linguistics of the language has led to some of his more innovative work.

"I always think for artists to take their shortcomings and turn them around and make them into what define them as an artist is a real trick," he told CNN.

"I think it's a wonderful thing for people to understand how language can be transformed and mutilated for musical reasons and actually bring out something special orally," he said.

Musically he's often been put in the same box as Mando-pop sensation Jay Chou, and has similarly has been the subject of rumor about ever aspect of his life, from his school grades to his sexuality.

Watch Wang Leehom talk about his rivalry with Jay Chou ».

Adding his face to a number of endorsements, the pressures of being in the public eye have made him become increasingly protective of his privacy.

"It's definitely changed me. It's like some defense mechanism I guess, to just be private, to keep things to myself, to protect myself or my loved ones. I am the same person, but just a different way of life," he said.

However it hasn't stopped him from branching out and taking on an acting career. He made his big screen debut in 2000 in the Hong Kong action flick "China Strike", but it was his role in Ang Lee's international success "Lust, Caution" that brought him wider international attention.

As for taking on new projects in the future, be they film, singing or even holding the baton once again, Leehom will stay true to his policy of challenging himself with different ventures.

"Sometimes it gives me a lot of trouble, sometimes it ends up launching a career which has been very good for me," he said.