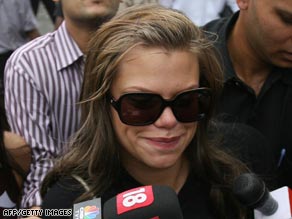 Goody, 27, only has months to live after her cervical cancer spread to her liver, bowel and groin, the British Press Association reported.

She sprung into the spotlight during her first appearance in the Big Brother house in 2002, before going on to launch a range of her own products and host television shows.

Goody's return to the house in 2007, on the celebrity edition of the show, ended in ignominy, after her taunting of Bollywood star Shilpa Shetty outraged viewers and resulted in more than 40,000 complaints.

However, in August 2008 she accepted an offer to go on the Indian version of Big Brother. Two days into that she was diagnosed with cervical cancer and left the house.

Goody's spokesman, Max Clifford, told PA that Goody was "devastated" and was working to put her legal affairs in order.

She has two sons, Bobby, five, and Freddie, four, and has told British media that she wants to leave them financially secure.

Her boyfriend, Jack Tweed, had proposed at her hospital bedside, Clifford said.

Goody, in a wheelchair, was seen in London on Sunday shopping for a dress.