(CNN) -- When Christopher Moore isn't jumping rope, shooting baskets or playing the board game Chutes and Ladders, the 8-year-old can often be found at home using his ninja fighting skills, protecting the world from would-be enemies. 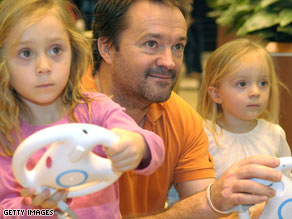 "I'm trying to save the other people from being hurt," he said of his Avatar video game adventures. "And I be beating him bad," he added with a coy smile and a nod toward his 15-year-old brother.

The Moore household, in Birmingham, Alabama, enjoys a good blend of at-home entertainment, something the foursome is doing more and more during these precarious financial times, explains the boys' mother, Lisa Moore.

They grill, play outdoors or whip out traditional games that may be decades old, and although she doesn't plop down at the video console with them, the boys and her husband often duke it out virtually.

"They're always in competition," she said with a laugh. "It keeps them busy. It keeps them occupied." iReport.com: Show us how you're entertaining yourself on the cheap

Numbers show that at-home entertainment is doing better than ever, flying in the financial face of so many industries that are struggling in this recession.

Netflix, a DVD rental service, has had a record quarter and now boasts 10 million subscribers. With no late fees, a selection of 100,000 titles (outdoing typical video stores by about 97,000), free postage, nine price plans and now the ability to stream 12,000 movies, Netflix's offerings are resonating loudly with concerned consumers, spokesman Steve Swasey says.

"Netflix has always provided unprecedented convenience and value ... [and] has been a growth company for the past 10 years," Swasey explained. "There's something for everybody. ... Right now we think [the surge in success] is because the value argument is stronger. People aren't buying DVDs, and they're not going out as much."

Bang for the buck and "affordable escapism" is what people want, agrees Scott Steinberg, publisher of DigitalTrends.com. That shows, too, in the gaming industry, which has become a $22 billion business, the Entertainment Software Association reported this year.

A movie, concert or sporting event gives several hours of entertainment. But a video game, even if it seems pricey at $60, can offer 40 hours of fun, Steinberg says, and can amount to a "much sounder investment." And many games can be downloaded cheaply or for free online, from the comfort of one's home.

"It's all about instant gratification," he said, adding that iTunes and streaming video services are two other examples of booming businesses. "You can sit there in your boxers with Cheetos on your chest and have a grand old time."

The gaming experience, too, has changed with the years.

Five years ago, online gaming was considered a solitary activity, says David Williams, who heads up the Nickelodeon Kids and Family Games Group. And although games can still be played alone, the social component is burgeoning.

"Over a third of families will play games together online," Williams said. They're staying home more, and they're "using games to connect with one another."

Addicting Games, a Nickelodeon free online brand that caters to teens and tweens, counted 40 million visits from 11 million individuals last month alone, Williams says. Another Nickelodeon brand, Shockwave, has also grown. The free offerings have boomed, but he said the subscription business, too, has continued to grow "more than 20 percent year after year."

When it comes to the games children and adolescents play, many parents such as Lisa Moore may choose to sit it out. But Christina Vercelletto, a senior editor at Parenting magazine, says that engaging in the games with them can do a family good.

"It can be an opportunity to bond with your kids," she said. If parents express interest, kids "will probably be thrilled. And you'll get a little window into what has them so excited."

Plus, by playing the games, parents can determine how comfortable they are with what their kids are doing.

For those who want to get the opinions of others, she points out that the Entertainment Software Rating Board provides feedback and that parents are always learning from one another on, for instance, discussion boards.

Beyond traditional entertainment, people watching their wallets can watch out for themselves while staying home. Take, for instance, the practice of yoga.

Rodney Yee, a nationally recognized instructor, says video and DVD sales are up. Also thriving is the Gaiam Yoga Club, his and his wife's first of its kind online 12-week yoga practice, which costs $5 a week.

"I really believe that this is an opportunity for all of us to re-evaluate the way we live in the world," Yee said. "Even though they seem like hard times, they're reflective times. We can look at our lives and question what we value by what we're doing."