(CNN) -- If the world of entertainment is any indication, the geeks shall inherit the Earth. 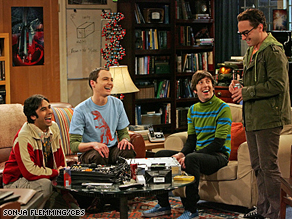 Programs like CBS' "The Big Bang Theory" are indicative of the coolness of geeks and nerds in pop culture.

The nerd herd is everywhere these days it seems: in books, on television and at the movies.

Geeks rallied to keep Apple co-founder Steve Wozniak in the game on "Dancing with the Stars."

They have also been burning up online message boards in anticipation of the new "Star Trek" movie, out Friday, and working feverishly to keep the NBC series "Chuck," an ode to geekdom, on the small screen.

In the 25 years since "Revenge of the Nerds" debuted at movie theaters, geek chic has grabbed hold and catapulted the brilliant, yet often socially inept, into the realm of -- dare it be said -- the hip and the cool.

"It is definitely hot right now in pop culture," said Benjamin Nugent, author of the "American Nerd: The Story of My People."

The popularity of shows like "Ugly Betty," "The Big Bang Theory" and "Myth Busters" are just a few examples that -- along with the box office success of Judd Apatow films like "Superbad" and "Knocked Up" -- have made Hollywood stand up and take notice of the lure of geekdom.

Although there have long been shows and movies that have attracted the geek nation, the new breed of entertainment goes a step further by featuring geeky characters and personalities front and center.

Nugent traces the concept of "the nerd" to 19th-century literature, with the socially awkward Mary Bennet in Jane Austen's "Pride and Prejudice" and Victor Frankenstein in Mary Shelley's "Frankenstein." The latter can perform the scientific task of creating a monster but can't find the emotional reserve to be its father.

Nugent said he believes that the watershed moment for modern-day nerds came with a surprising romantic lead on Fox's "The O.C.," which he says sent waves through network television.

"The show had a guy who they thought was going to be their heartthrob, a character named Ryan Atwood, played by Benjamin McKenzie," Nugent explained. "The comedic foil that they gave that character was Seth Cohen, played by Adam Brody, and an unexpected thing happened in that audiences embraced Adam as the heartthrob on the show.

"I think that created an opening for other TV and screenwriters to say 'Oh, there's a way to create a character that doesn't have to be the James Dean type but can be the overeducated, overanalyzing, almost nebbish character that can also be an attractive, engaging character,' " Nugent added.

Lori Kendall, an associate professor in the Graduate School of Library and Information Science at the University of Illinois at Urbana-Champaign, studies popular cultural representations of nerds -- which she said is not quite the same as a geek.

"My take on it is that geek is a more positive term, and nerd is still negative," she said. "Geek doesn't stick as much." (The coinage of "nerd," incidentally, is attributed to Dr. Seuss, who used the word in his 1950 book "If I Ran the Zoo.")

Kendall pointed out that people can "geek out" about something and not necessarily be thought of as a nerd.

In the 1980s, Kendall said, nerds became synonymous with computers and technology.

Even as the public at large has grown more familiar and comfortable with technology, the old stereotypes of the smart, pocket-protector-wearing white male who can't get a girlfriend has continued, she said.

Rob Malda, creator-director for the site SlashDot, which bills itself as providing "news for nerds," said society couldn't help but take notice after "the nerds of the '70s and '80s became the driving influencers of technology in the '90s."

"Some of those nerds got rich, others gained tremendous influence, and some became household names," said Malda, who embraces being a nerd. "So I don't know if it 'fascinates' people, but the mainstream became aware of them because in many ways, a small number of them hijacked the means of communication and business. It's hard to ignore that."

Bill Prady is well aware of the nerd's power. Before he became a successful writer and producer of shows like "Dharma & Greg," "Gilmore Girls," and "Two and a Half Men," he was a computer programmer.

He drew on that knowledge to co-create, along with Chuck Lorre, the CBS hit "The Big Bang Theory," which chronicles the comic adventures of a pair of brilliant physicists, their equally geeky friends and their attractive female neighbor.

Prady said his television show takes a "beautiful mind" approach to the characters that he and the other writers so obviously have a deep affection for.

"We don't make fun of them, because very much we are our characters," Prady said. "While we're not as smart as our characters ... we share many of their passions in terms of pop culture."

Prady said the audience is very protective of the characters and relates to them. He believes that attitude is a reflection of the fact that many have felt like outsiders at some point.

The show's fan base is similar to those of sci-fi shows, and they follow the sitcom with much the same devotion, he said.

And although the "The Big Bang Theory" relies on a UCLA professor of astrophysics as a consultant to get the science right, Prady said it's the writers who infuse the show with its geeky pop culture references.