(CNN) -- British model and television personality Katie Price, also known as Jordan, and her singer husband, Peter Andre, are to separate, according to a statement released Monday. 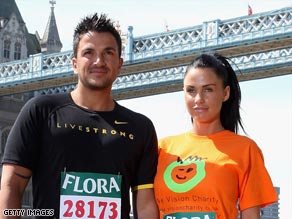 The couple found romance on the reality show "I'm A Celebrity... Get me Out of Here!," which was filmed in the Australian jungle.

The statement said: "Peter Andre and Katie Price are separating after four-and-a-half years of marriage," the British Press Association reported.

"They have both requested that the media respect their families' privacy at this difficult time."

Only last month the couple, whose reality TV show of their life features on British television, said they were trying for another child.

They have two children together, son Junior, 3, and 1-year-old daughter Princess Tiáamii.

Price has a 6-year-old son Harvey, by footballer Dwight Yorke, who is disabled.

Price first made her name as a tabloid newspaper topless model, but has since gone on to become a television star, author and clothes designer. She also competes in show jumping events and has her own stable of horses.

Andre, who was born in London but raised in Australia, came to prominence in 1996 with his international hit "Mysterious Girl."