(CNN) -- She's the antithesis of the typical fashion designer, preferring to step away from the adulation of shows and flashy parties, yet from behind the scenes, Miuccia Prada has a huge impact on the world of fashion. 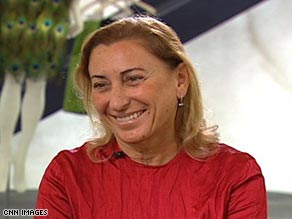 Preferring to stay behind the scenes, Miuccia Prada has built up a fashion empire.

Miuccia Prada has taken a unique path to become the name and impetus behind a worldwide brand that has developed what fashion brands can achieve beyond the catwalk.

Coming from a wealthy family that supplied luxury goods, she gained a degree in political science from the University of Milan before studying to be a mime artist for six years in the late 1960s and early 1970s.

"[It was] part of the culture of those times" she told CNN. "At that point I like the idea and also in those years you wanted to do anything that was strange or different or eccentric."

She fostered many left-wing political and feminist ideas before entering the fashion industry in the 1970s, which was then operating to a different set of values. Yet she disagrees that there are unmanageable contradictions between her personal values and her work.

"If you compare with philosophy, [fashion] is frivolous, but frivolity may be something good, something that is part of our lives, so I don't dislike it and what I like is the mix, that in your life you can have serious things, more frivolous ones," she told CNN.

"Beauty is not something that is contrary; it is the right of everybody. Still I retain the idea of justice and so many other ideas, but that is my work, and it is a contradiction that still is creating me problems, but it's like this."

While Prada has expanded its operations across the world and is focusing, like so many other premium companies, on China, it remains synonymous with wealth and luxury.

Bringing the iconic black Prada nylon bag to the market in the early 1990s was just one way in which Miuccia and her husband Patrizio Bertelli transformed the slightly frumpy family business and helped shift perceptions of what a fashion house could or could not do.

"I always wanted to do something that was nearly impossible, but obviously it had to be something that made sense to people because if you think about now, the black nylon is everywhere," she told CNN.

From 1980s chic and glamour, Miuccia has never been afraid to take risks with her collections or spark the imagination of the public -- her very first collection was likened to something from The Flintstones; her Fall 2009 collection featured fishing waders.