(CNN) -- He has been at the center of Asia's biggest sex scandal, but now actor Edison Chen has broken his silence on the public episode that has ended careers and caused him to face at least one reported death threat. 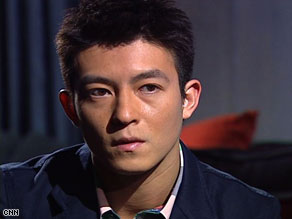 Internet sex photos of Edison Chen and starlets caused a huge media storm and fall from grace for many.

Talking exclusively to CNN on his return to Hong Kong, where he had been forging a career in the movies, Chen reveals his side of the scandal that broke in early last year when hundreds of sexually explicit photos of Chen with other celebrities turned up on the Internet.

"There's been a lot of talk through the past year and a half about this or that and a lot of rumors, a lot of hearsay, and I feel, you know, I've kept quiet just to kind of respect everyone and respect the law," Chen told CNN.

A Hong Kong computer technician was sentenced to more than eight-and-a-half months in jail for dishonestly obtaining access to the intimate photos when Chen sent his computer in for repairs. But it is still unclear exactly how the images made their way to the web.

The photographs caused shock in Hong Kong and across Asia, with around 1,300 salacious images fueling front page news for tabloids for weeks.

There was also a huge public backlash against the 28-year-old who has been one of the rising young stars of Asia cinema. After the scandal broke, Chen, who admitted taking the photos, announced his retirement from Hong Kong's entertainment business and fled to his native Canada.

Added to the media attention, Chen says he faced death threats. A bullet was sent to a TV station in Hong Kong earlier this year warning the entertainer to stay out of the limelight. While Chen issued his own apology for any hurt or embarrassment caused soon after the photos surfaced, he maintains he suffered as well.

"I believed I was a victim. I believed that I was hurt by this a lot. I believed that...I knew that I had nothing to do with the spreading of these photos," he told CNN in the exclusive interview.

"I can't say I didn't do anything wrong. I've admitted that I was wrong, and I wouldn't say sorry if I wasn't wrong. But I also believe that at the same time that I wasn't the perpetrator, and I had suffered a lot from this as well."

Chen has suffered a spectacular fall from grace and some of the starlets in the photos have endured public disgrace in this culturally conservative region. For some, careers have been left in ruins.

Chen says he has not spoken to any of the women identified in the photos since the scandal broke. "Initially it was because I couldn't find them. Secondly, it was because I didn't really know how to approach and really what to say to be honest with you," Chen told CNN.

Cecilia Cheung was one of the actresses identified in the photos and in a recent interview, she had strong criticism for Chen.

"I wasn't allowed to talk to her in the initial because of the police request and they were investigating me...I had so much things on my mind," said Chen.

"I'm not trying to say that that justifies any wrongdoing that she thinks I've done to her. But I hope that she can understand, and I hope that she can forgive me either today or one day, and she'll understand that I had my difficulties, and I really, really never wished this to happen upon anyone, and I still respect her."

Watch the full exclusive TV interview with Edison Chen online. » Chen talks at length to CNN's Anjali Rao about the women involved in the photographs, why he took the images, the effect the scandal had on his health, his family and others.