(CNN) -- The power of music and the power of politics met Tuesday, with a hip-hop mogul and one of the most prominent leaders in Congress joining their considerable forces to spotlight issues facing youth in America. 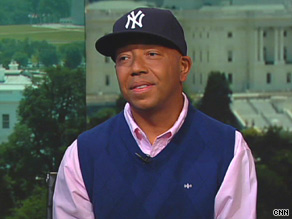 Russell Simmons hopes by investing in youths they can stay out of trouble and be more successful adults.

House Speaker Nancy Pelosi attended a youth conference co-sponsored by entrepreneur and entertainer Russell Simmons in Washington. The one-day event, called Keeping the Promise to Our Children, brought legislators together with entertainment A-listers, including Oscar-nominee Terrence Howard, who used their celebrity to advocate a variety of causes: foster care, health care and education among them.

Actress Gabrielle Union and actor/musician Howard were among the celebrities at the conference who pushed for policy changes directed at improving educational outreach to foster children. Only 54 percent of children in foster care graduate high school, according to the University of Chicago's Chapin Hall Center for Children.

"Intervening in the lives of these young people, giving them a sense of dignity and worth, providing them with more opportunities, therefore, is one of the most important things you can do, not just for them, which is the most important thing, but for the strength of our country," said Pelosi at a news conference before the event.

Last year, the organization pushed for a $5,000 college loan subsidy for students who mentor at-risk youths, and the subsidy was passed in the House as part of the College Opportunity and Affordability Act. This year, the organization has lobbied for the Foster Care Mentoring Act of 2009, which was introduced by Sen. Mary Landrieu, D-Louisiana; and Rep. Joseph Crowley, D-New York, also attendees at Tuesday's conference. The act proposes an allocation of $15 million for foster-care mentoring programs.

Investing in youths now can help them stay out of trouble and be more successful adults, said Simmons.

"We have such a great opportunity to make changes at this time and save our communities money and anguish," said Simmons. "The economics of saving kids save money."