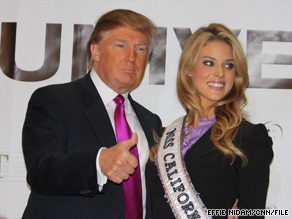 Donald Trump poses with Carrie Prejean in May. Prejean was removed as Miss California USA on Wednesday.

Prejean, 22, retained her title last month despite a controversy over topless photos, missed appearances and her statements against same-sex marriage.

Miss USA pageant owner Donald Trump decided to fire Prejean a month after he gave her a second chance.

"Carrie is a beautiful young woman, and I wish her well as she pursues her other interests," Trump said.

"This was a decision based solely on contract violations, including Ms. Prejean's unwillingness to make appearances on behalf of the Miss California USA organization," he said.

Watch the new Miss California talk about the developments »

Lewis told CNN's Larry King on Wednesday that it wasn't one thing Prejean did, but "many, many, many things."

"She came to us and said, 'I'm not interested in your input; I'll make my own decision what I'm going to do,' " Lewis said. "You know, when you have a contract, when you're working for someone, you have a responsibility to follow through on what that requirement is."

Lewis told King it was clear "she was not interesting in upholding the title or the responsibilities."

Trump brought Prejean and Lewis together in New York for a meeting last month, after which he announced that communications between the beauty queen and pageant officials had been repaired.

"I told Carrie she needed to get back to work and honor her contract with the Miss California USA organization, and I gave her the opportunity to do so," Trump said. "Unfortunately, it just doesn't look like it is going to happen, and I offered Keith my full support in making this decision."

Charles Limandri, Prejean's lawyer, said she learned about the decision Wednesday morning in a phone call from Trump's office.

"This is all kind of a big shock," Limandri said. "We've been working with Mr. Trump's office. She's been doing all the speaking engagements she's been asked to do. It is not true that she has not been cooperating."

No one from the pageant organization ever warned Prejean she was not doing what they wanted, he said.

"Something is going on," he said. "Truth is not being told. I don't understand where this is coming from, or why."

"For people to say that she breached her contract, that she is not doing speaking engagements is false," he said. "She did one last Sunday in Las Vegas and it went really well."

Prejean stepped into controversy at the Miss USA pageant in April when she declared her opposition to same-sex marriage in a response to a question asked during the national pageant by Perez Hilton, a pageant judge. Prejean finished as first runner-up, but it was not clear if her answer cost her the crown.

During a radio interview Wednesday with Billy Bush, who also was host of the pageant, Prejean said it was that controversy that led to her losing her title, not contract issues.

"It's just because of my answer, I think," Prejean told Bush. "None of this would be happening right now if I just said yeah, gays should get married, you're right Perez Hilton."

Wednesday night on Larry King, Bush asked the new Miss California USA the question that sparked controversy for Prejean. Bush asked Tami Farrell whether in light of several states allowing gay marriage she thought other states should do the same.

"I think it's a personal decision and a civil rights issue," Farrell said. "It's something we should let each state decide."

In addition to Prejean's gay marriage answer, controversy boiled to a new level in early May when seminude photos of Prejean appeared on gossip Web sites.

Miss California USA officials -- some of them outspoken advocates of same-sex marriage -- suggested the photos breached the contract Prejean signed with the pageant. These officials also complained they couldn't reach Prejean and she had missed important pageant events.

The controversy seemed over when Trump declared the pictures not to be too racy and Prejean promised to do better in communicating with the state pageant.

Hilton, the judge who asked the same-sex question during the pageant, cheered Prejean's firing.

Shanna Moakler, a former Miss USA who resigned as co-executive director of the California pageant when Trump did not dismiss Prejean last month, welcomed Wednesday's decision.

"First and foremost, my faith has been restored in the Miss Universe organization and with Donald Trump," Moakler said. "I believed eventually what I intimately knew would come to fruition."